From Uthiru, Kangemi, Westlands to Eastlands, heaps of filth remain an eyesore.

• On August 27, Sakaja toured various parts of Nairobi and promised to deal with the garbage menace “in the next few days". 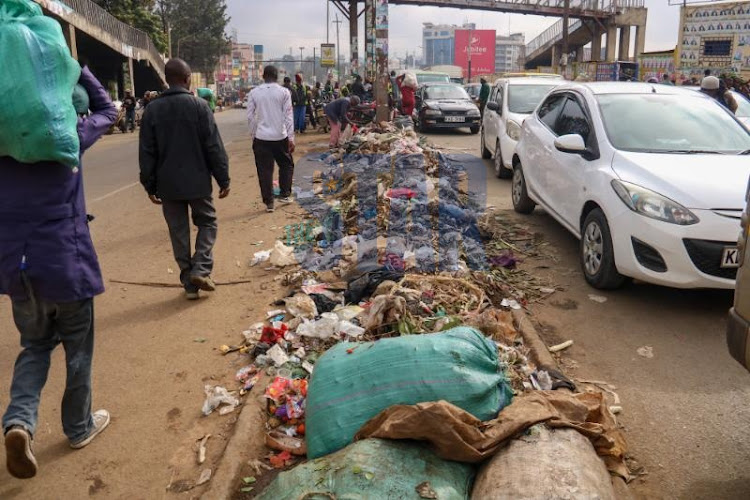 From Uthiru to Kangemi, Westlands and Eastlands, among other areas, heaps of garbage and filth remain an eyesore.

On August 27, just two days after he took office, Sakaja, his deputy Njoroge Muchiri and City Hall officials toured parts of Nairobi and promised to deal with the garbage menace “in the next few days".

After the tour, the governor took to his social media pages and said he had given a directive on the clearing of garbage.

“Toured various parts of the city this morning with my officers. I have given firm directions on resolving the current garbage problem across Nairobi in the next few days. We will have a city of order, dignity, hope and opportunity for all,” he posted on Twitter.

Mary Wangui, a fruit vendor at Kangemi market, told the Star that garbage is still a major problem in the area despite Sakaja's directive.

“But let’s give Sakaja the benefit of the doubt,” the trader said.

Fiona Adhiambo, a food vendor in Kayole, said residents hope Sakaja’s administration will deal with cartels that have captured the garbage collection sector.

“The governor’s word on garbage has not meant anything here as you can see the heaps,” she said, pointing to the piles of smelly garbage near her makeshift eatery.

“But I hope when the trucks come to take the garbage away, it will be the norm, not just a one-time event.”

Calls to the office of the governor for comment went unanswered.

In his campaign manifesto, Sakaja pledged to prioritise garbage management.

The garbage problem is long-running, with complaints mostly levelled against connected barons who have ring-fenced the sector but offer no services.

His overwhelming victory points to the confidence that Nairobi residents have in him.
Opinion
3 weeks ago

This is his first official meeting since he assumed office on Thursday.
InPictures
3 weeks ago

The governor committed to delivering a first-class county without a second-class citizen.
Counties
4 weeks ago
Post a comment
WATCH: The latest videos from the Star
by GORDON OSEN News Journalist
Nairobi
20 September 2022 - 22:00
Read The E-Paper