Bereaved father of twins yet to receive help from Governor Sakaja

Omondi says none of the promises have come to fruition, at least so far 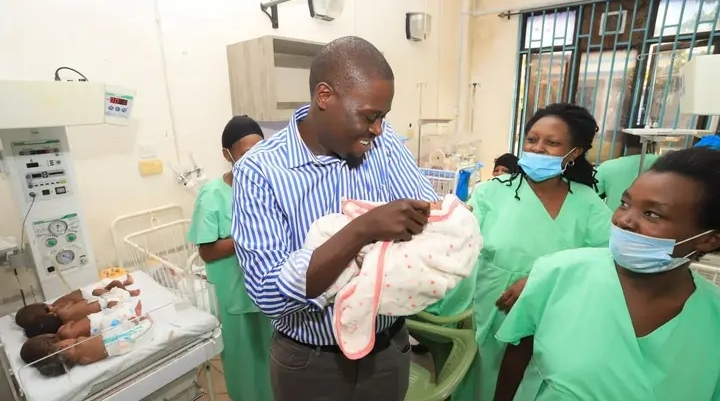 The father of twins who lost his wife to excessive bleeding last week is yet to receive any help from top city leaders as promised.

At the same time, the 29-year-old first-time father has to think about the Sh12,000 medical bills the hospital is demanding and the accumulating morgue bills.

When the news about the incident broke last weekend, some senior elected leaders in the city promised to hold the negligent medics accountable and also help Omondi meet some budgetary burdens he was dealing with.

Omondi says none of the promises have come to fruition, at least so far.

The Star witnessed when the office of Nairobi Governor Johnson Sakaja called Omondi while he was attending to his infants at KNH with promises to visit his house.

The officer had told Omondi that the governor was touring Mama Lucy hospital that afternoon and that he needed to rush to the area to meet him. He was not able to.

“In the alternative, the officer said I should send a google map pin location to him so that the governor can visit," Omondi told the Star on Thursday.

"I hoped that I would raise the issues of my financial situation and request a job. He has not yet come."

Omondi also said some officials in the governor’s office had also promised that Sakaja was amenable to giving him some money to help in footing the bills, move his wife’s body to Kadem in Migori and even get him a county job.

“I still wait in hope. I know the governor is a truthful person who keeps his word. I’m still waiting for him at my house as he had promised to visit. I hope for the best,” Omondi said.

On his part, Senator Edwin Sifuna told the Star he has not reached the bereaved man but he was planning to visit him soon.

“We want to go there to see if the governor did whatever he had promised to do at the hospital or it was just all PR gimmick,” he said.

The boys have since been admitted at Kenyatta National Hospital pediatric ward for jaundice treatment.
News
1 week ago

Swift action could have saved mother of twins, autopsy shows

Report shows that the contents of Anyango’s uterus were not well evacuated after her boys were delivered
News
1 week ago
Post a comment
WATCH: The latest videos from the Star
by GORDON OSEN News Journalist
Nairobi
15 September 2022 - 22:00
Read The E-Paper