Nairobi community leaders call for peace ahead of polls

Members engage in weekly meetings that aim to sensitise the community on peace in the slums.

• The political leaders take advantage of the jobless youths through giving of handouts. 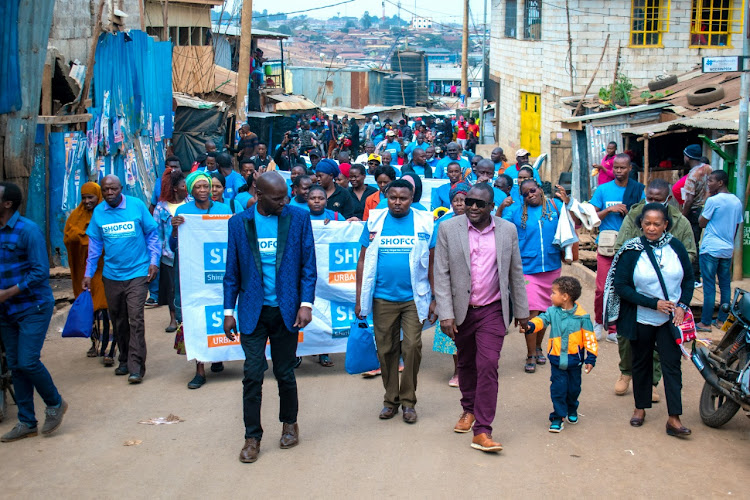 Community leaders from 13 slums in Nairobi pledged to preach ahead of the general election in Kibera on Friday, July 29, 2022.. They were led by Shofco CEO Kennedy Odede (in pink shirt)

Community leaders from various informal settlements within Nairobi City have pledged to foster peaceful co-existence during the electioneering period in a bid to curb a possible outbreak of violence among members of various communities.

Kenyan elections have been for a long time characterised by chaotic scenes especially when there are allegations of possible rigging of presidential votes.

The supporters of those who are aggrieved take to the streets, destroy property, steal from shops and sometimes go as far as killing one another.

In Nairobi for example, Kibera and Mathare slums are always on the news headlines for the wrong reasons.

Community leaders drawn from informal settlements within the city and others from across the country reiterated that they will use Shofco's two million membership and networks to spearhead and promote peace by preaching love, unity, tolerance and law abidance.

Since December 2021, the community leaders have been putting effort to raise awareness and inculcate a sense of peaceful co-existence among communities that live together in various informal areas as a way to promote ethnic diversity.

Through football tournaments that have been organised across the country in various counties.

Shofco has been at the forefront in sensitising the youth on the dangers that are associated with political violence and the need to disassociate themselves from intolerance and shun any involvements that are a recipe for the shedding of blood and destruction of property.

Due to the high unemployment rate currently being witnessed in Kenya, the youths are always misused by politicians to violently express their dissatisfaction when election results don't favour them.

The political leaders take advantage of the jobless youths by giving handouts. Community leaders from 13 slums in Nairobi pledged to preach ahead of the general election in Kibera on Friday, July 29, 2022.. They were led by Shofco CEO Kennedy Odede (in pink shirt)

The tournaments mainly take place in slums of major cities and rural areas and involve drama festivals with themes that promote peace and the need to tolerate those with varying political views while.

Members engage in weekly meetings that aim to sensitise the community on peace in the slums.

Shofco has been providing platforms for voters to interrogate politicians in debates where the aspiring leaders and the electorate get the opportunity to engage.

Politicians have been put on the spot to elaborate on the plans they have for eliminating of possible violence outbreaks during the electioneering period.

"We have traversed the nation while preaching peace as we all know that it is the common citizen who suffers most whenever there is an outbreak of violence during elections. In this regard, we have sought to partner with more than 13 community leaders from various slums in Nairobi and rural areas in the quest to have peaceful elections", Shofco CEO Kennedy Odede said.

He also added that leaders vying for various political seats should watch their utterances and ensure that they don't plunge the country into violence like the one witnessed during the 2007 General Election where more than 1,100 people died as a result of post-poll chaos.

"Elections come and go while we as the electorate remain. We have weathered the Covid-19 storm. This election should not be another challenge that we have to face. I urge all Boda border operators to avoid taking handouts from politicians to cause violence. Everyone will be held accountable for their actions", he added.

Other leaders who were also present during the door-to-door sensitisation drive spoke in one voice while urging all Kenyans to take part in preaching peace during and after the polls.

Candidates sign campaign peace pact in Migori ahead of polls