WHO needs only 30 KU acres for emergency response regional hub, not 200a

• On Wednesday, KU vice chancellor Wainaina told the Star they did not oppose project but demand proper procedures be followed. 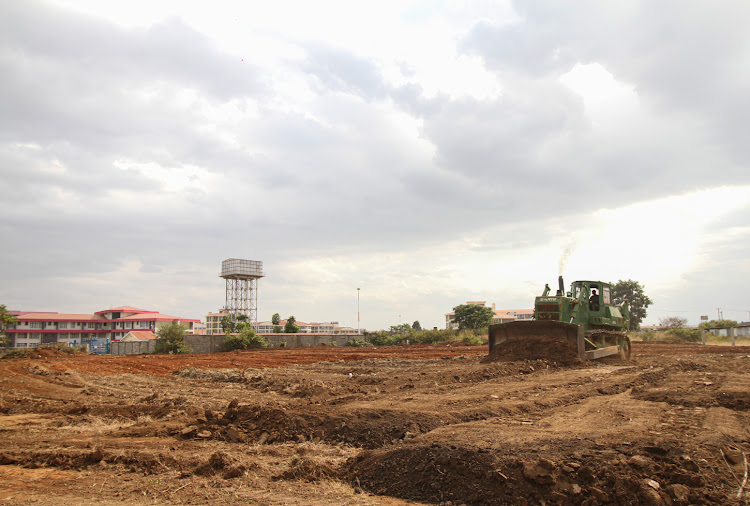 WHO HUB: Bulldozer prepares 200 acres belonging to Kenyatta University for construction of WHO emergency hub on July 6
Image: ENOS TECHE

The World Health Organization has said it only needs 30 acres of disputed Kenyatta University land to build offices and stores for an emergency hub.

He said the Kenyan government is contributing Sh3.6 billion ($31 million) to the project. This includes Sh588 million for construction, while the rest mostly covers the value of the land.

“The Government of Kenya has generously committed 12.14 hectares (30 acres) of land, and $5 million (Sh588 million) towards construction,” Dr Tedros said.

The project comprises a WHO Centre of Excellence for a Health Emergency Workforce. It will have godowns to store medical supplies and equipment that can be sent across Eastern Africa within 72 hours during emergencies.

Dr Tedros said KUTRRH is currently hosting the emergency hub rent-free until the new project is ready in three years.

“The Government of Kenya is also generously providing WHO with office space for 120 staff for three years while the hub is being built…That’s why the three-year office space can help us start supporting countries in our continent,” he said.

WHO will give Sh5.5 billion ($47 million) to cover the Kenya project, another hub in Senegal and two liaison offices in Addis Ababa and Johannesburg.

He criticised KU vice chancellor Prof Paul Wainaina, saying the university merely held the land in trust for the public.

The 200 disputed acres is mostly bushy and is between KU and the referral hospital.

On Wednesday, Prof Wainaina told the Star they were not opposed to the project but were demanding proper procedures are followed.

He said they were not even informed about Saturday’s groundbreaking on university land but heard rumours about it.

He said the university was already planning to build student hostels on the disputed land because most students have nowhere to stay.

Prof Wainaina said, “I have not been informed by anyone what the activity on KU land is about. This is university land, and as VC, it is important that I be informed of what is happening.

"We are not opposed to the project that is being rumoured to be done on the land but the proper procedures and process must be followed.”

The university has about 75,000 students, mostly on the main campus, and many of them live outside in rentals because of the shortage of hostels.

“We want to reduce the number of students staying off-campus as they are exposed to crime and even death, and provide accommodation for them.

"Taking our land for other purposes is not in the interests of our students or the university,” Prof Wainaina said.

The WHO emergency hub initiative was introduced in Nairobi in 2017 by Dr Ibrahima-Soce Fall, the WHO Afro director for Emergencies when he met Kenyan CS for Health Dr Cleopa Mailu.

The emergency hubs will be in Nairobi and Dakar, Senegal, with Nairobi serving Eastern and Southern Africa.

The hub in Dakar will serve Western and Central Africa. Two liaison offices have been proposed for Addis Ababa and Johannesburg.

Groundbreaking for WHO logistics hub to take place this month

African countries have battled many outbreaks in the past including ebola.
News
7 months ago

KU protests construction of WHO hub on 200-acre land