Long wait over as NMS embarks on issuance of 3,456 title deeds

Nairobi as the capital city iss targeted to get 200, 000 title deeds.

• Some land dealers had forged ownership documents and sold the property to private developers.

• Apart from the 3,456 titles ready for issuance, 6,500 have been processed and are being printed while another 6,000 are undergoing processing at the Ministry of Lands. 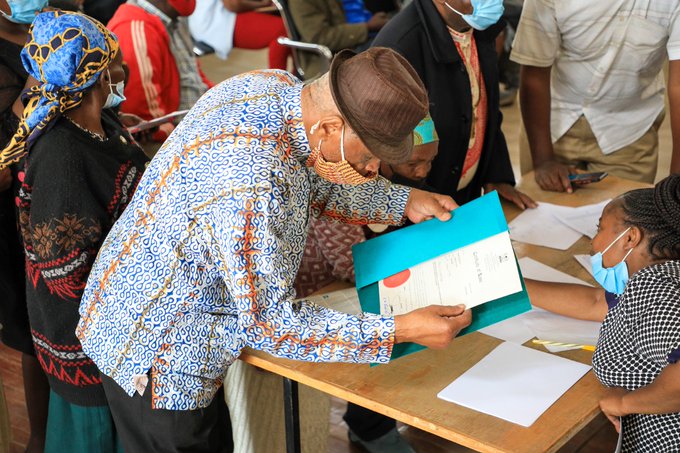 A tenant looks at his title deed after being issued by the Nairobi Metropolitan Services
Image: NAIROBI METROPOLITAN SERVICES

Land disputes, pending survey work and bureaucracy have impeded the issuance of title deeds in Nairobi.

For 21 years, Nairobi tenants have gone through agony in attempts to get title deeds for their lands, as cases of land grabbing continue to rise.

Ushering a new dawn, the Nairobi Metropolitan Services this week embarked on the process to issue 3,456 title deeds as part of a programme launched by President Uhuru, aimed at issuing over a million title deeds in different parts of the country.

Nairobi as the capital city is targeted to receive at least 200,000 title deeds.

Areas that have started receiving the title deeds include;  Dandora, Kayole, Umoja, Mathare North, Kariobangi South, Ngei phase One and Two among other city settlements.

Apart from the 3,456 titles ready for issuance, 6,500 have been processed and are being printed while another 6,000 are undergoing processing at the Ministry of Lands.

President Kenyatta launched the issuance of Eastlands title deeds on May 30, 2018, at Jacaranda grounds in Embakasi.

He was to issue 50,000 documents, but the process was halted in 2019 after the discovery that the land had been allotted illegally.

Some land dealers had forged ownership documents and sold the property to private developers.

In the same year, blame games played out between the National and County Governments over the delay in title deeds issuance.

This emerged after an inquiry by Nairobi County Assembly Lands, Planning and Housing committee into the title deeds saga, after it emerged that out of 20,000 titles reported to have been issued in a ceremony presided over by the President, only 79 were genuine.

The two offices came under fire from the City MCAs for stalling the process launched by President Kenyatta in May 2018.

However, since the inception of NMS in 2020, the Mohammed Badi headed entity has been able to process a total of 18,356 titles free of charge.

He acknowledged that the entity issued 2,400 title deeds within its first 100 days in office.

The NMS boss said the digitised lands platform known as Ardhi Sasa, has streamlined the title deed issuance process in the county.

The system was launched by President Uhuru Kenyatta last year in April.

The platform requires the Lands ministry to digitise land records, streamline records of transactions and ownership.

It is aimed at eliminating fraud, corruption and manipulation of critical land records. It is also expected to reduce the long queues at the registries.

Ardhi Sasa has limited or removed the human element and interaction as much as possible to frustrate land cartels.

He urged Kenyans to use Title deeds received to better their lives and those of their families.
News
1 month ago

The ministry aims to digitise all land records by December 2022.
News
4 months ago
WATCH: The latest videos from the Star
by MAUREEN KINYANJUI News Reporter
Nairobi
30 June 2022 - 12:18