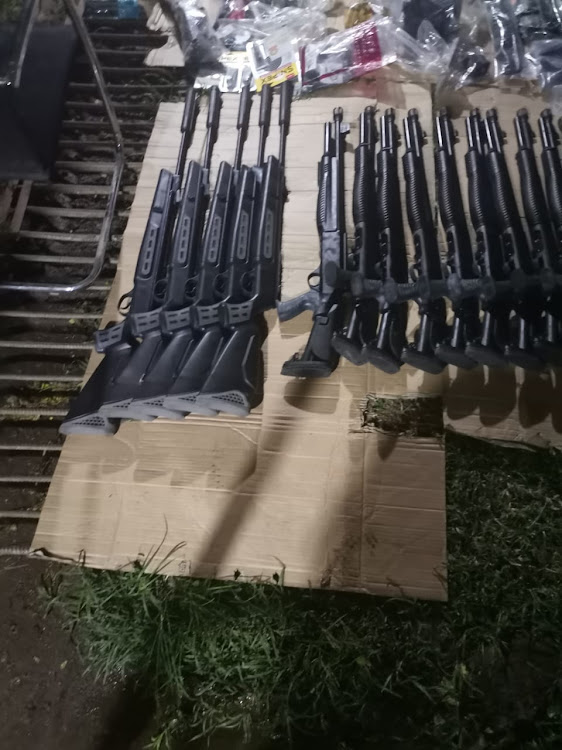 ARSENAL: Some guns recovered from an office on Wood Avenue in Nairobi on June 21.
Image: CYRUS OMBATI:

Police providing security to an auctioneer seeking to recover Sh4.9 million stumbled across 22 assorted firearms and 565 bullets in Kilimani.

The Tuesday night discovery was made at an office along Wood Avenue, where a man had put his valuables up for auction. He had failed to pay rent for as long as three years.

The tenant was identified as Ken Lugwili of Vic. Technologies Limited. He drove to the police station and surrendered.

"I am a licensed gun dealer but I didn't realise the licence had expired," he said.

Officers handling the case said his licence to handle and sell the weapons expired in 2018.

The Anti-Terror Police Unit took over the case following the discovery of the weapons.

A team of armed police officers was providing security to the auctioneer following a court order to break in and remove the proclaimed goods.

Police said office was broken into by the auctioneers and one room was found to have a standard armoury where the weapons were found.

Police said they also found 25 pistol holsters, dozens of magazine carriers, 30 slings, 10 sniper torches and a certificate of registration as a firearm dealer.

Kilimani head of the DCI Stephen Tanki said they took the items into custody while investigations go on.

“It seems he was a firearms dealer but it was dangerous for him to leave this issue reach this stage with such weapons therein. All indications are the licence had expired,” he said.

Police said they were yet to get in touch with Lugwili for talks over the discovery.

The team revisited the scene on Wednesday as part of investigations into the recovery and to aid the auctioneer recover his money.

Licensed firearms dealers are supposed to undergo mandatory vetting annually to ensure they are compliant.

Interior Cabinet Secretary Fred Matiang’i had in December 2018 announced the vetting of the civilian firearms holders and the dealers following increased cases of fake certificates.

The vetting process involves psychiatric assessment by a government psychologist, criminal record checks and ballistic testing of the weapons and ammunition by the Directorate of Criminal Investigations.

The vetting is meant to address the procedural improprieties in the issuance and licensing of firearms.

“His Excellency the President ordered this to be done and the National Security Advisory Committee and other security agencies have been keen to ensure this exercise is completed.

"We want to deal with the various aspects related to crime," Matiang'i said.

The vetting locked out a number of dealers.

Board resumes renewal of civilian firearm licenses after year

Many dealers and the gun holders operated with 'illegal' weapons during closure
News
1 year ago
“WATCH: The latest videos from the Star”
Nairobi
22 June 2022 - 22:00