Gikomba's second modern storey to be completed in September

•Over the years, mysterious market fires have become the norm in Nairobi with Gikomba being the most affected.

•Seeking to solve the solution, the county government and the national government resorted to building a new five-storey Gikomba market and other markets at Sh3 billion. 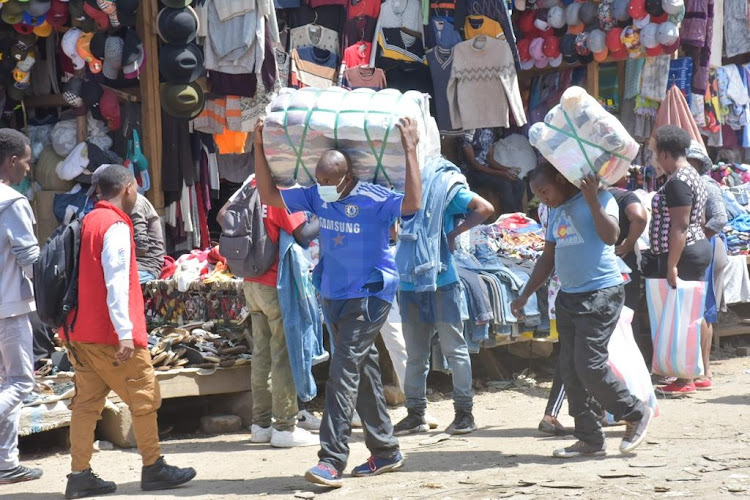 Business people in Gikomba market carry on their daily activities prior to the budget reading 2022/23 on April 7, 2022.
Image: File

Plans to transform Gikomba market into a modern storey building are under way.

The second eight-storey building is almost complete and will be opened to traders in three months.

Housing Principal Secretary Charles Hinga said they were concerned about how most traders have been conducting their businesses.

He said it was time they were provided with a dignified place where they can freely do their trade.

“In October 2017, President Uhuru Kenyatta promised to build a new modern Gikomba after a fire razed down the entire market. Four years later, a six-floor new ultra-modern market has been built,” he said

Over the years, mysterious market fires have become the norm in Nairobi with Gikomba being the most affected.

Seeking to solve the solution, the county and national governments resorted to building a new five-storey Gikomba market and other markets at Sh3 billion.

The five markets include Sh389 million Mwariro in Starehe, Westlands at Sh214 million, Gikomba at Sh493 million and Karandini market in Dagoretti at Sh294 million and New Wakulima at Sh800 million.

Hinga said since the first phase of the market is complete, most traders have been doing their businesses with ease.

For Sh460 million, the six-floor-storey building ( phase one) comprises 41 stalls (fish traders), 96 stalls for the original tenants, 88 stalls (to be shared by two traders each), and 74 Mpesa stalls, five salon stalls, five hotels and 107 spaces for informal traders.

“Our idea is to ensure that these markets are a one-stop-shop where you will walk in, do your shopping, and get somewhere to relax within the same building,” Hinga said.

“ This will reduce time spent when one moves from one point to another trying to locate what they want.”

For decades, the Market has been a source of income for many including food vendors, second-hand clothes traders, carpenters, business people and many more.

However, they have also encountered losses in fire incidents.

In August last year, more than 900 traders at Gikomba sued the county government, demanding Sh20 billion in compensation due to constant fires at the market.

The traders had listed 15 fire incidents since 2015.

They had said the frequent occurrences indicated that the county government has failed to take any or adequate precautions for their safety and that of the public at Gikomba Market.

A probe ordered by the President in October 2017 is yet to provide conclusive answers and there have been numerous fire outbreaks since then.

There have been allegations that land ownership tussles between tenants in county-owned houses, suspected land grabbers and traders have fuelled the perennial fires

The annual Gikomba fires appear to be a "routine" and no one has been arrested for years.
Counties
6 months ago

Another fire razes down section of Gikomba market

Three months ago the same market went up in flames.
News
6 months ago

Relief to traders as state allocates Sh700m to modern markets

Sh5.9bn has been allocated for second phase of Kenya Informal Settlement Improvement project.
News
2 months ago

The market will be the second to have a lactating room after Gikomba market.
Counties
2 months ago

Shame as state fails to protect Gikomba traders from fires

For the umpteenth time, a section the biggest open-air market in East Africa was gutted by fire.
News
7 months ago
“WATCH: The latest videos from the Star”
by MAUREEN KINYANJUI News Reporter
Nairobi
16 June 2022 - 22:00