• On his side, Sakaja pledged to absorb the medical staff into the leadership of his administration.

• 1,600 NMS healthcare workers on contract asks Sakaja to consider them if he's elected as governor. 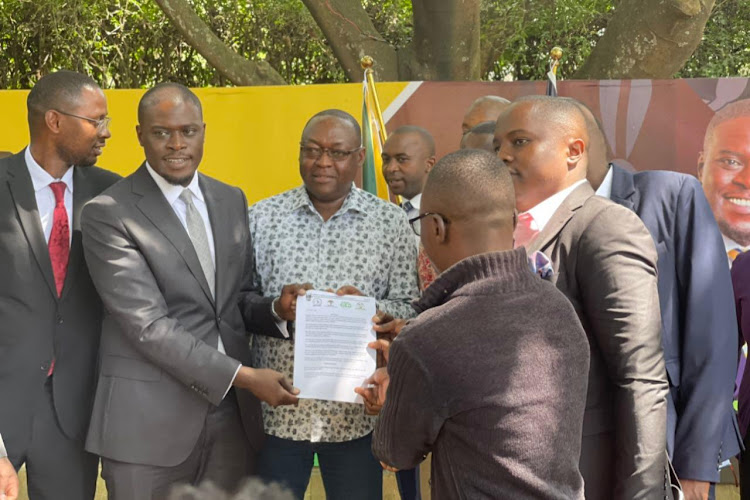 This comes as the Kenya National Union of Nurses (KNUN) Nairobi Branch today raised concerns through their officials on where the absorbed staff under NMS will go to once the term’s entity comes to an end later this year.

Highlighting their plight, KUN Nairobi Branch Secretary Boaz Onchari said that promotions have not been done for many years, and some employees have moved up only one grade in about 20 years.

“Our sector has had the most strikes because our issues have not been addressed. Many staff employed in the year 2010 have been on probation for 12 years. Are they supposed to spend their whole working life on probation where they can’t even get a loan with a payslip that shows they are not permanent employees?” Onchari said.

The union leaders were speaking in Nairobi where they presented a memorandum from officials of various unions representing Nairobi County health workers to Sakaja, and his running mate Njoroge Muchiri.

On his side, Sakaja pledged to absorb the medical staff into the leadership of his administration.

“The sacrifices of health workers are not appreciated enough. You put in so much and receive so little. Health is the most important devolved function and no governor should put health in the periphery,” Sakaja said.

As Nairobi’s Senator, Sakaja has been vocal on health matters putting the Senate‘s Health Committee on the spot over deplorable state of Mbagathi Hospital

Among the issues raised include shortage of nurses and drugs in the hospital that is serving thousands of Nairobi residents.

As a result, the Senate summoned the NMS boss Director General Mohamed Badi in attempt to solve the issues.

If elected, Sakaja promised that his administration will ensure funds are available to avoid health facilities running out of commodities and finance for essential services.

“Nairobi residents should access hospitals and get services they need including medicine. Under my leadership I will ensure that hospitals will not run out of finances to a point of lacking basic drugs.

The plight of health workers in Nairobi has been an issue even before the formation NMS.

They protested against delayed promotions and redesignation, and accused the NMS of violating their collective bargaining agreement

WATCH: The latest videos from the Star
by MAUREEN KINYANJUI News Reporter
Nairobi
10 May 2022 - 18:35