ITS is a system in which information and communication technologies are applied in managing road transport. 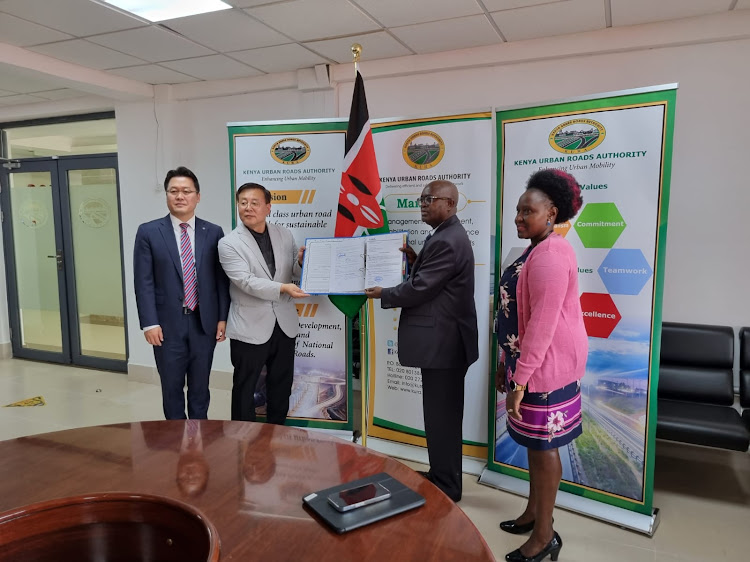 The construction of the Traffic Management Centre and improvement of 21 junctions are set to begin in August.

This is after the Kenya Urban Roads Authority last week awarded a Sh548 million consultancy contract to a Korean Consortium, led by Cheil Engineering  Company Limited.

The company is expected to implement the first phase of the Nairobi Intelligent Transport System and junction improvement.

ITS is a system in which information and communication technologies are applied in managing road transport and infrastructure.

This will be during bid evaluation, negotiation, supervision of detailed engineering, design of the project, construction of TMC and support the preparation of operation and maintenance at a cost of Sh548 million.

The main objective of the  project is to decongest the city, promote road safety  and enhance urban mobility.

Kinoti expressed confidence in the awarded company, noting that it was experienced in implementing such projects.

“You (Cheil Engineering  Company Limited) have won a very competitive contract and I have confidence in your vast experience in implementing projects of such magnitude. I assure you of our full support,” he said.

With the ITS, the government is keen to take managing of the traffic situation in the city of Nairobi a notch higher.

A 2017 report by Numbeo—a crowd-sourced global database of reported consumer prices—ranked Nairobi the city with the second-worst traffic gridlocks in the world.

“We estimate that in this city, due to travelling to work/school, 1,406.55kg of CO2 is produced per passenger yearly. You need 16.4 trees for each passenger to produce enough oxygen to cover that,” reads the report in part.

The report also said Nairobi residents spend 55.8 minutes in traffic which leads to an estimated loss of Sh58 million a day.

By using intelligent algorithms, the smart traffic lights system allows longer traffic flow from roads with the most traffic.

ITS changes with time depending on traffic flow within several arms of the junction and that makes it more efficient, and more traffic flows effectively.

It also comes with a mobile electronic police system that enables flexible monitoring of roads and the command centre is able to identify traffic law violation incidents where they occur.

The entire project is expected to cost Sh6.5 billion, funded by the Economic Development  Corporation  Fund, through Export-Import Bank of Korea.

The project aims at establishing an integrated system as part of the smart city transport management for Nairobi.

To implement the ITS project, in November 2020, President Uhuru Kenyatta directed Kura to build a TMC at City Cabanas to ease congestion on key Nairobi roads.

“The control centre will utilise traffic cameras and censors and harmonise location data to provide a synchronised signal at 100 new junctions in addition to the existing traffic lights,” Uhuru said.

Phase two of the project will involve junction improvement and installation of ITS facilities for 81 intersections and is expected to commence later in the year.

Already, Kura has successfully implemented an ITS pilot project in 10 junctions along Nairobi’s Western Ring Road and Ngong Road which has greatly reduced traffic snarl-ups.

The model, according to the authority, has proved very effective  in managing  traffic hence removing the necessity of traffic police intersections.

ITS on W. Ringroad from Yaya Centre to Kileleshwa Ringroad to Waiyaki in 2018.
Counties
4 weeks ago

Why there is jam in Nairobi

A fatal accident in Mlolongo is also linked to the jam.
Counties
3 weeks ago
“WATCH: The latest videos from the Star”
by MAUREEN KINYANJUI News Reporter
Nairobi
09 May 2022 - 22:00