A postmortem was planned on the bodies to establish if it was arson or accidental.

•The bodies were moved to the mortuary.

•Such fire incidents in informal settlements are caused by among others illegal power connections. 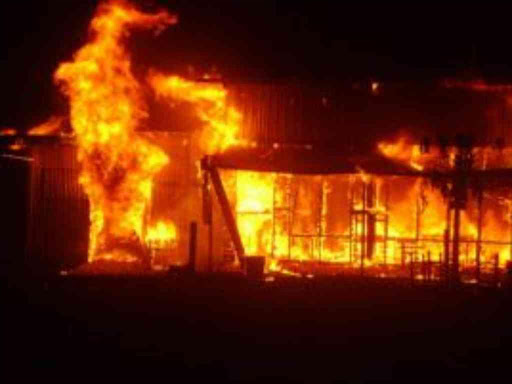 A couple was Tuesday morning burnt to death in Mowlem, Nairobi.

They were sleeping in their iron sheet home when the fire broke out killing them.

The deceased were identified as Elisha Otieno and Sarah.

A relative who was sleeping in the next room detected unusually high temperature from the house where the couple was.

It was when he went to check that he found the house on fire and raised the alarm.

A fire engine arrived at the scene minutes later and joined residents in containing the fire.

Nairobi police boss James Mugera said the bodies of the two were then discovered.

He said police are investigating to establish the cause of the fire.

A postmortem was planned to establish if it was arson or accidental.

The bodies were moved to the mortuary as investigations were launched.

Elsewhere in Mathare and Lungalunga slums, several people were left homeless in a fire incident. No injuries were reported but many structures were affected.

Such fire incidents in informal settlements are caused by among others illegal power connections.

There has been a campaign to address the menace amid resistance.

Meanwhile, four suspects were Wednesday morning arrested after they attempted to attack and rob a driver who was ferrying loaves of bread in Ruai, Nairobi.

The four had attacked the driver and grabbed three crates of bread and as they tried to escape an alarm was raised alerting the public and police who arrested them.

Police had a difficult time controlling a mob that wanted to lynch the suspects.

The crates were recovered from the suspects who are expected to face charges of stealing.

Fire incidents are common in slums and cause much losses with little response.
News
4 months ago

The deceased included a five-year-old child and a couple.
News
5 months ago

The three and their accomplices tried to rob a police officer in the area
News
2 months ago
“WATCH: The latest videos from the Star”
by CYRUS OMBATI Chief Crime Reporter
Nairobi
04 May 2022 - 22:00