Bahati estate will have 12,000 high-density storied buildings of between six and 16 floors.

•NMS had earlier said,  jointly with the Nairobi county government, they would soon break ground for 10 other projects for affordable housing. 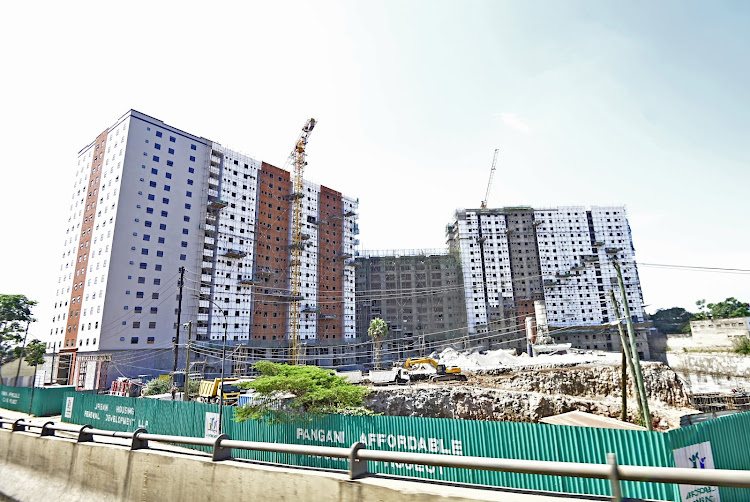 In a statement, NMS housing deputy director Marion Rono said they have started the redevelopment of 10 estates.

NMS had earlier said,  jointly with the Nairobi county government, they would soon break ground for 10 other projects for affordable housing.

As part of the redevelopment plan, the Bahati estate will have 12,000 high-density storied buildings of between six and 16 floors.

They will consist of three, two and one-bedroom units to replace bungalows in the 20.4 hectares estate.

Phase one of the project continues to take shape.

The tenants of Pangani will be part of the first group that will take ownership of the new units.

In May 2020, each of the tenants received Sh600,000  to facilitate their resettlement rent for two years as construction works continued.

Each tenant will be allocated a new house, they will pay Sh8, 000 monthly for 30 years.

David Sirma, of Technofin which is the developer of the project said the apartments are divided into two, where the affordable housing ones have 952 units and the commercial ones with 610 units.

As part of the affordable units, social amenities will be set up within the compound.

Infrastructure services like water have been addressed with sufficient water supply storage being factored in two-level basements.

A basement parking in the courtyard with playgrounds and a supermarket will be set up.

Pangani being the pilot project is estimated to cost Sh5 billion, on 5.2 acres of land

It is among seven estates that are under the affordable housing project in Nairobi, Jevanjee, Ngong road, Suna Road estates, Uhuru and Inspectorate staff quarters.

The official groundbreaking of the Pangani estate was to happen in August 2018 but was postponed to December the same year when President Uhuru Kenyatta was expected to launch it.

The land had been occupied by 81 houses.

Housing PS says the plan to will be achieved through schemes paid via check off systems.
News
3 months ago

He said, so far, about 225,000 had received approval and were in various stages of implementation.
News
3 months ago

Each tenant will be allocated a new house for which they will pay Sh8,000 monthly for 30 years.
Counties
3 months ago

Last August, Soweto residents were given a one-month eviction order ahead of the project.
Counties
4 months ago
“WATCH: The latest videos from the Star”
by MAUREEN KINYANJUI News Reporter
Nairobi
22 February 2022 - 22:00