Safest facilities, located away from the houses, require residents to pay a fee 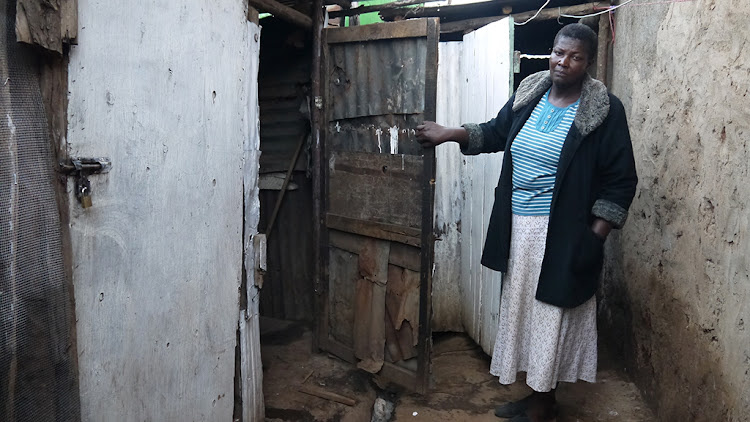 For many years, Nairobi’s Kibera slums were infamous for their ‘flying toilets’.

The reputation of the informal settlement preceded it, with many people associating it with uncleanliness and blatant disregard for hygiene.

The area is also associated with cases of muggings, looting and violence.

Like many informal settlements in Kenya, Kibera also has poor sanitation, and its hygiene infrastructure poses a threat to women and girls in the area on a daily.

A case in point is that of A.C, a resident in Kibera who was in the bathroom one morning in November last year when an intruder appeared.

The 21-year-old college student lives in Kisumu Ndogo with her mother and usually wakes up early to prepare for school.

While she was showering, she noticed that someone was peeping at her through a hole in the bathroom.

Her bathroom, like many in Kibera, is made from iron sheets.

“The bathroom has no roof, and the iron sheet walls have numerous holes in them. We often patch the holes up ourselves with pieces of cloth or polythene bags but someone constantly removes them,” she said.

The bathroom door, she said, has a broken latch so a piece of string is used to close it.

“Through the space under the door, I saw a pair of legs. They looked like a man’s legs. I looked up and saw an eye through a hole on the bathroom wall and I screamed,” she recalled.

The suspect immediately fled and neighbours who rushed to A.C's aid were unable to catch him.

From that day on, A.C decided to shower in her house.

“Showering in the house is difficult because our house is very small. It is just one room with a curtain partition for the sitting room, the bedroom and kitchen area,” she said.

A.C stands in a basin in the kitchen area of her house then bathes as the water pours into the basin.

“The basin makes it less messy because otherwise, I would flood the entire house,” she says laughing.

However, A.C quickly turns grave again as she thinks about what might have befallen her on that day.

She says she was lucky nothing happened to her that day because not so many girls and women get away from such people.

“There was a day we heard that a girl in a neighbouring building had been raped while she had gone to take a shower. We hear such stories all the time in our area,” she said.

Patricia Lena, a mother of four, said she forbade her daughter from using the washrooms in her Soweto neighbourhood because of the danger that lurks there.

"Young men are always hanging around the toilet in my area under the pretence of charging customers to use the toilet. I have seen them on a number of occasions ogling and touching young girls inappropriately, claiming to have done it accidentally," she said.

Now, Lena's daughters have to use a public toilet 10 minutes from their house for Sh10.

As you walk around Kibera, you will notice that there are several public toilets and water points.

Most of these facilities require Kibera residents to pay for the basic service of using the bathroom and fetching water.

V. A, a resident of Lindi area in Kibera, said these public facilities came up because of residents’ need to access decent and dignified sanitation services.

“Where I live, there is no toilet. I have to go down the street five minutes from my house to use the toilet that most people living in the vicinity also use,” she said.

The mother of three said she is often sceptical that someone might follow her daughters to the bathroom someday and something bad might happen to them.

“Imagine if someone knows when your teenage girl goes to bathe every morning or every evening after school. What if they time them one day and ambush them with a weapon in the bathroom? I don’t like to imagine but cases like these happen,” she said.

Judith Shitabule, an activist working with Umande Trust in Kibera, said they work tirelessly to sensitise the community to be aware of these dangers.

“We teach the girls and women to be brave and to also be aware of their surroundings. If they feel that someone might be following them, then they should raise an alarm immediately so the perpetrator gets scared and hopefully runs away,” she said.

Shitabule however knows that it is merely not enough to sensitise the community. Instead, a complete overhaul of the sanitation infrastructure in Kibera is required.

“Landlords need to consider everyone’s safety when building these facilities. Some residences have one toilet and bathroom for everyone to share, which is a health risk on its own," she said.

"Others have no toilets at all or they are too far to be accessed at night or early in the morning.

No girl or woman, Shitabule said, should be scared of something as natural as taking a shower because they feel some pervert might be waiting to spy on them.