Hungry in CBD? There are 7 must-eat street food for you

For the early risers, with as low as Sh30 one can enjoy a piece of boiled arrow roots, sweet potatoes and cassava 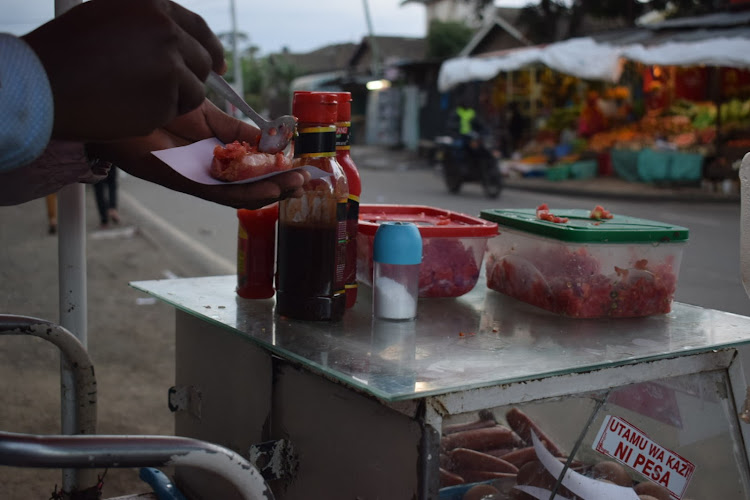 Majority of Nairobi residents live on a budget and most of them depend on food kiosks for lunch meals because they are pocket friendly.

Due to economic hardship in the capital and continuos futile search for formal employment, some have decided to venture into the fast food business resulting to the rise of street food culture.

Nairobi being the capital city is a fusion of different tribes and cultures and street food is becoming increasingly popular forcing vendors to add a twist to the snacks to make them more appealing.

A spot check by The Star has revealed that different types of street foods are sold at different time of the day.

Early in the morning, especially within the Central Business District, one can easily spot a food vendor pushing their filled-food trolley or just parked at a certain spot waiting for customers.

Some are busy chopping tomatoes, peppers, onions and coriander (which make up kachumbari) and which is used as an accompaniments for the delicacies they sell.

For the early risers, with as low as Sh30, breakfast is served. One can enjoy a piece of boiled arrow roots, sweet potatoes or cassava. 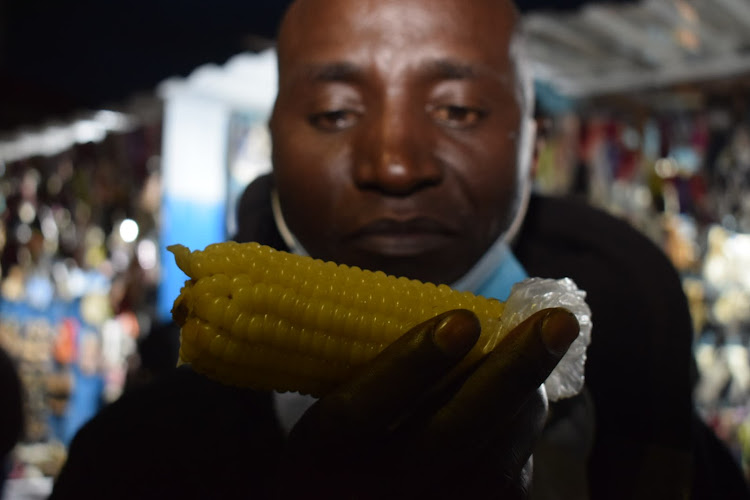 Roasted maize, referred to as mahindi choma is one of the most common street foods in Nairobi.

To add flavour, it is often slathered with lime, chili and salt.

Most of the mahindi choma vendors are  found by the road sides with the snack being sold from late afternoon hours.

The delicacy quite affordable with the price ranging from as low as Sh10 depending of the size one wants. 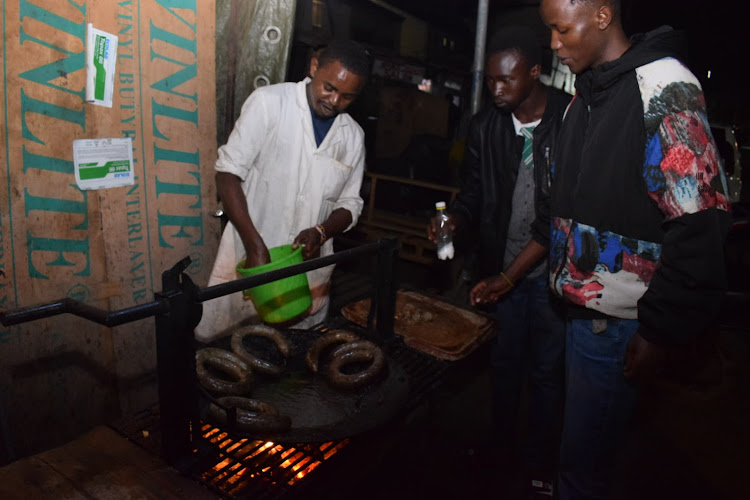 This famous street food originated from the Kikuyu tribe and is fondly referred to as the African blood sausage.

The delicacy is usually prepared during cultural occasions among the Agikuyu, where goats and cows are slaughtered to prepare different meals for celebration.

After slaughtering the cow or goat, the men clean the intestines of the animal.

They then mix the pieces of meat that makes up the mutura with all the meat chunks being stashed in the intestines.

Blood from the animal, along with pieces of fatty meat chunks and some vegetables for flavouring are also stuffed, this is then boiled before being grilled then served.

However, most mutura on the streets of Nairobi are not made using blood.

Vendors instead put their own twist, and normally use minced meat.

Mutura is mostly sold in the evenings, it is a popular snack for residents as they go back home from a hard day at work.

Served with Kachumbari on the side, the price mostly ranges from Sh10 upwards depending on the size. 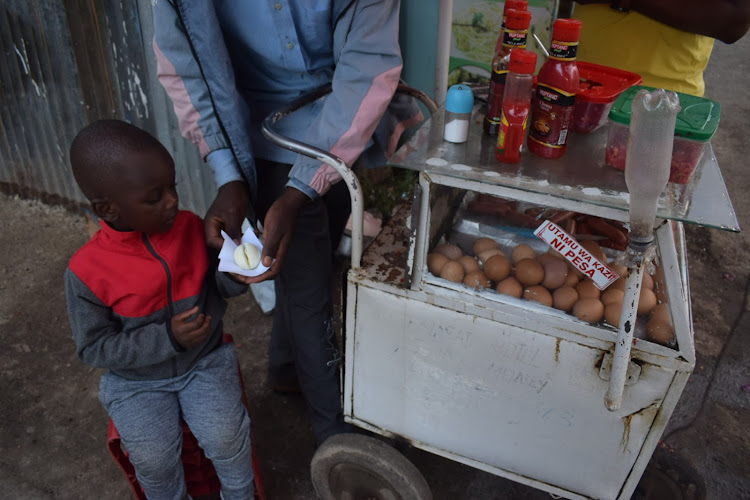 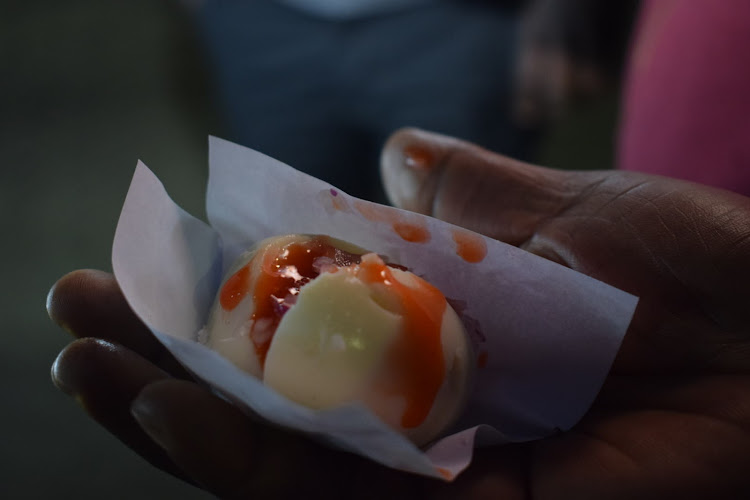 Mayai gonga is simply a hard-boiled egg. Most vendors selling the boiled eggs will also have smokie, sausages or samosa.

The vendors skilfully unshell the egg, slice it into two and either fill it with pepper, kachumbari, some sauce, salt to taste and voila, you have your delicious snack.

This either a sausage or smokie split into two which is then stuffed with kachumbari.

Depending on one’s preference, the smokie pasua is either topped with chilly or tomato sauce.

The vendors of smokie pasua strategically place their carts near matatu terminus to attract commuters who are in the queuing for the next public transport home. 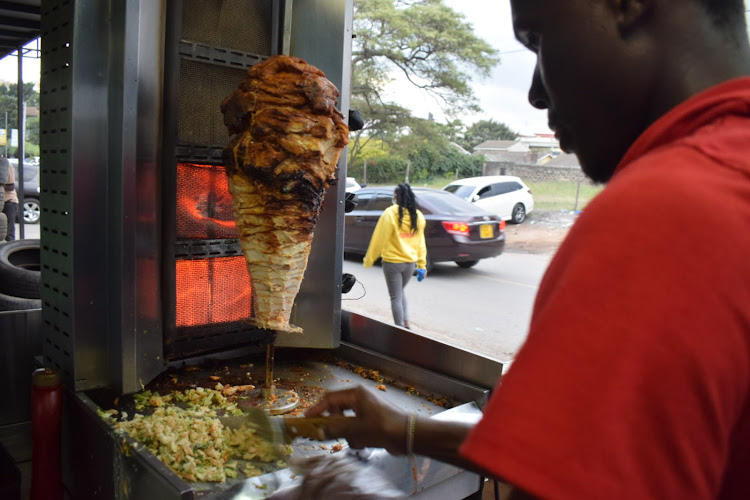 Shawarma, one of Nairobi's famous street food in South B estate, on January 17, 2022.
Image: CHARLENE MALWA

This is the most lavish street food mostly found in South C and South B estate.

Shawarma is a popular Levantine Arab dish consisting of meat cut into thin slices, stacked in a cone-like shape, and roasted on a slowly-turning vertical rotisserie or spit.

Getting its delicious taste depends with how the meat is marinated and how specific sauces, mayonnaise and spices are mixed.

Unlike other street food, Shawarma is quite expensive with prices ranging from Sh200-Sh250. 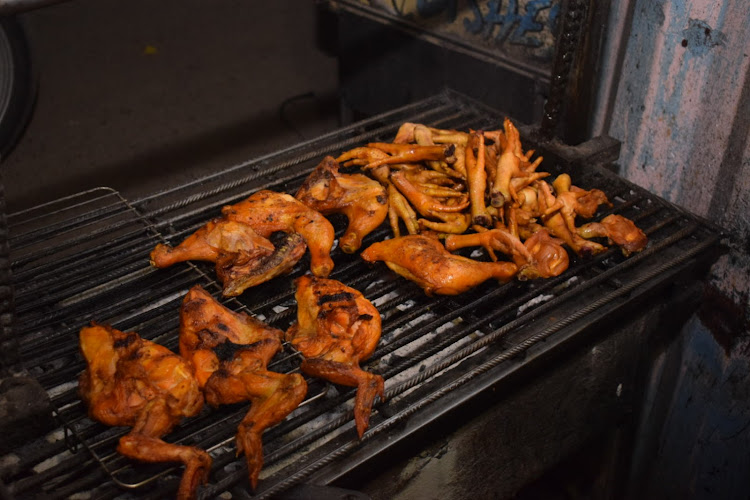 Nyama choma, which is barbecued meat, can be referred to as Kenya's unofficial national dish.

The meat can either be chicken, goat or beef, served roasted with accompaniments such as ugali, mukimo, or roasted potatoes.

Nyama choma can cost  from upwards of Sh100 depending on the size and preference of the consumer. 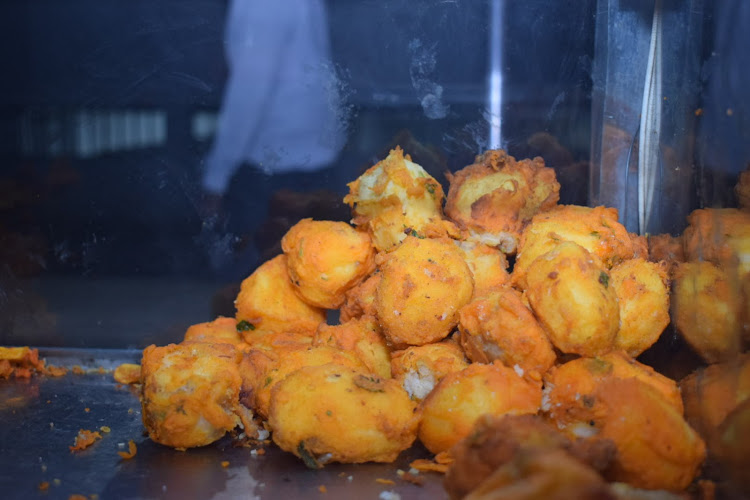 Viazi karai is a crunchy Kenyan specialty consisting of boiled potatoes that are coated in a batter made with regular and gram flour.

The potatoes are then deep-fried.

Viazi karai is commonly served with tamarind chutney on the side.

Depending on the quantity, one can pay as low as Sh50 for the potatoes. 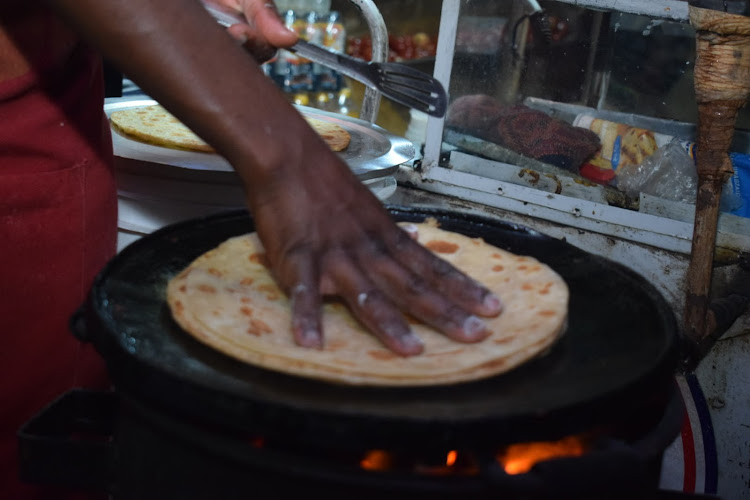 Bored in CBD? There are interesting spots for you

The allure of vibanda meals

Klabu is literally a food heaven with its yummy and affordable variety
Sasa
7 months ago
by MAUREEN KINYANJUI News Reporter
Nairobi
18 January 2022 - 22:00