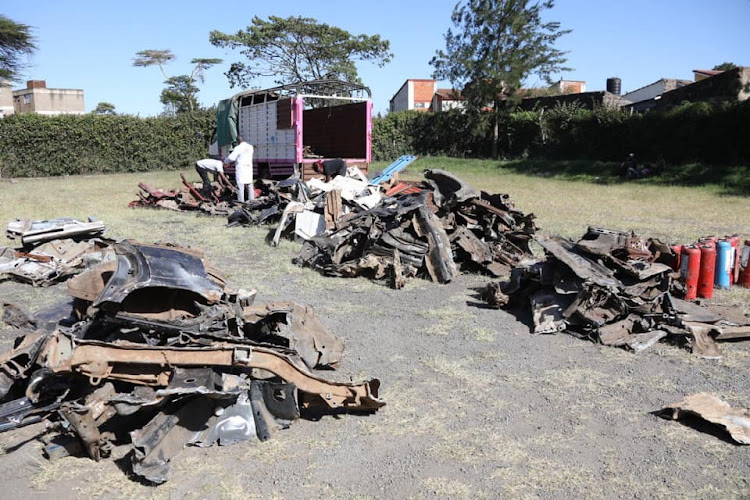 A scrap metal dealer was on Wednesday evening arrested after three vehicles that had been stolen in the city were found dismantled in his yard in Kariobangi.

The suspect was arrested as a lorry carried away parts of the dismantled cars out of his yard following a tip-off from residents.

Police say they suspect the yard has been the main point of dismantling cars for scrap metals.

Police had been tipped off that three vehicles—a Toyota DX 102, Toyota 110, and a Pajero—had been driven into the scrap metal yard before they were hurriedly dismantled by a standby pool of mechanics.

In an elaborate operation by the highly skilled craftsmen, the vehicles were deconstructed into pieces under the cover of darkness and by 4am were already loaded into a lorry ready for the lucrative scrap metal market.

The skilful mechanics left little trace of their trade and it would take a genius to establish that vehicles had been chopped into pieces the night before at the yard that operates as a welding workshop during the day.

Police responded to the call just on time, as the lorry carrying the load was roaring to leave for a yet to be established destination believed to be along Mombasa road.

Instead, the lorry was diverted to Buruburu police station where the load was offloaded, as the suspect was grilled for detailed information into his trade and his accomplices.

"More arrests shall be made as investigations into this high level crime begin," Buruburu police boss Francis Kamau said.

He said there has also been an increase of cases of stealing guardrails and investigations will extend there.

“They steal these guard rails for scraps exposing many road users to dangers. Investigations are ongoing into the trend for more recoveries,” he said.

The scraps are usually exported.

Says the government will introduce weigh bridges in Narok to clamp down on overloaded trucks that damage roads.
Counties
1 year ago

Vandalism of the standard gauge railway in Makueni has reduced by 80 per cent, county commissioner Mohammed Maalim has said. Maalim on Wednesday ...
Counties
3 years ago
by CYRUS OMBATI Chief Crime Reporter
Nairobi
13 January 2022 - 22:00