Test runs on the road will take place in March, ahead of the June commissioning

• On December 23, 2021, President Uhuru Kenyatta laid the last box girder along the main carriage of the Nairobi Expressway.

• Initially, the project was to take four years but the government shortened it to two years, with contractors working 24 hours on site. 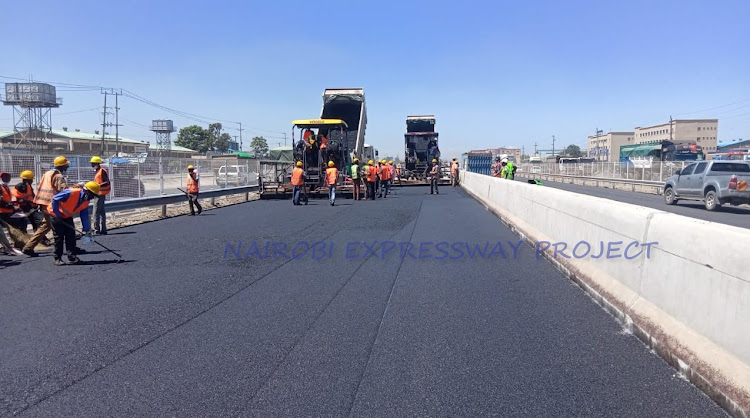 Various sections of the Nairobi Expressway have been dressed in tarmarc as completion nears.

Waterproofing of the road is also set to begin this week.

On December 23, 2021, President Uhuru Kenyatta laid the last box girder along the main carriage of the Nairobi Expressway, an indicator that the complex work of the project had been completed.

This is a relief to motorists who spend hours on traffic jams brought about by the diversions.

The Expressway is a 27.1km road project and starts at Mlolongo and passes through the Jomo Kenyatta International Airport and Nairobi’s CBD ending at Westlands along Waiyaki Way.

The Sh72 billion project is a public-private partnership with no debt incurred by the government.

China Communications Construction Company, the parent firm of China Road and Bridge Corporation, is funding and building the highway.

Initially, the project was to take four years but the government shortened it to two years, with contractors working 24 hours on site. 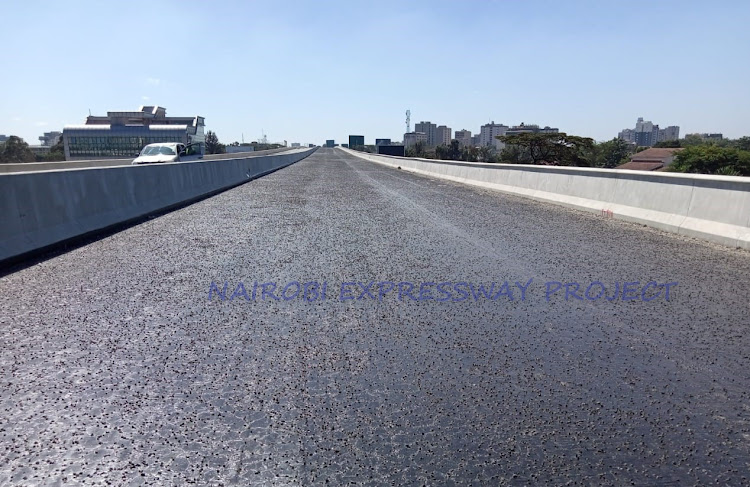 The Nairobi Expressway is  now 76.4 per cent complete. It will have a four and six-lane dual carriageway within the existing median of Mombasa Road, Uhuru Highway and Waiyaki Way. It will also have 10 interchanges.

The section between the Eastern and Southern bypasses will be a six-lane dual carriageway, while the section from James Gichuru will be four lanes.

Once complete, it will be the first expressway built in Kenya and the second largest toll road in Africa after the Dakar Toll Highway.

The double-decker road is the equivalent of having half of the Thika Superhighway suspended above Uhuru Highway- the city's main traffic artery.

Motorists will be expected to pay between Sh100 and Sh1,550 in toll charges, depending on the size of the vehicle and the distance covered.

According to the Ministry of Transport, the Expressway is the most sophisticated infrastructure project the government has ever done due to its location and its impact.

The benefits include improved connectivity for transport of goods, services and people between Nairobi and the Northern Corridor.

Some 6,000 people have also been employed since construction started in July 2020.

Test runs on the road will take place in March. The President is expected to commission the project in June.

Nairobi Expressway to open to motorists on June 30

A public notice published by Kenha on Friday indicates that the highway is 94 per cent complete.
News
4 months ago