Residents are in a hurry, complain footridges taken over by vendors, street families and muggers

• The Sh8.5 billion dualling of Outering Road was launched in January 2015 and funded by the government and AfDB.

• Many pedestrians avoid footbridges and risk their lives. 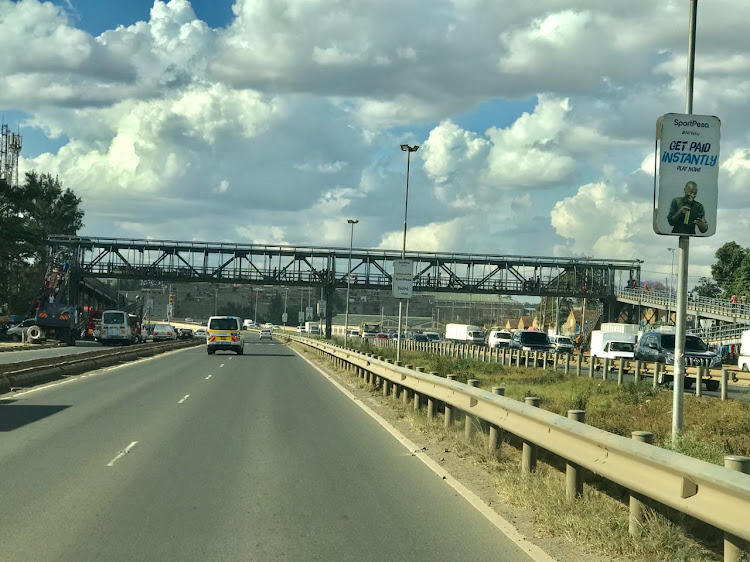 DUAL CARRIAGEWAY: A section of OuterRing Road with the Huruma footbridge in the background.
Image: MAUREEN KINYANJUI

Outering Road has claimed another victim.

A toddler who was crossing the busy road with a guardian. They were crossing directly and avoided a pedestrian footbridge.

A water tanker overturned while trying to avoid running over the child.

It was the latest death on Nairobi's deadliest road but much  of the blame lies with reckless pedestrians taking dangerous shortcuts.

In 2015 The city launched the Sh85 billion conversion to a 13km dual carriageway with footbridges for safety.

It was was expanded by Sino Hydro Tianjin Engineering Limited.

Embakasi West MP George Theuri has for a year pleaded with residents to make use of the footbridges instead of risking their lives.

Many pedestrians prefer shortcuts , jumping the ditch between the roads to cross over instead of using the footbridges.

“How many more lives are we going to lose because of just ignoring simple road safety rules, especially along Mutindwa along Outering Road footbridge?" Theuri asked.

"Please use the pedestrian footbridges to cross over the Outering Road to avert more deaths".

The National Transport and Safety Authority said from January 2020 to October 31, 2020, 37 accidents occurred on Outering Road, followed by Thika SuperHighway with 34 deaths in the said period.

Waiyaki Way and Mombasa Road, which have been under construction due to the Nairobi Expressway, have recorded 31 and 29 accidents, respectively.

The Northern Bypass has recorded 25 accidents, followed by the Eastern Bypass with 24, Southern Bypass at 23 , Kangundo Road at 21 and Ngong Road at 20.

Outering Road has been making headlines in the past two years with the number of accidents between 2018 and 2019.

In June 2018, NTSA ranked Nairobi’s Outering Road as the most dangerous highway in the city.

Consequently, In August last year, the national government was urged to erect barricades to forestal the multiple accidents involving pedestrians risking their lives to cross.

Residents were in an uproar over the increase of pedestrian fatalities and accidents.

MP Theuri said at least four pedestrian fatalities are reported every month as a result of pedestrians crossing the tarma instead of the using the footbridges.

Residents along the road have repeatedly raised complaints of traders occupying designated footpaths and footbridges.

The walkway around Outering–Kangundo Road roundabout all the way to Pipeline has also been occupied by traders.

It is a display area for carpenters selling beds and desks. Welders also place their products on the walkways.

However, despite the good intentions, these designated areas have been taken over by traders, boda bodas, street families, beggars and some muggers.

Some residents argue that the mass of annoying and sometimes ill-intentioned humanity has taken over the footbridges and footpaths, leaving them no choice but to dodge the traffic.

Footbridges and the walkways are no longer safe, they say.

As a result, the Kenya Urban Roads Authority and the police arrested at least 300 people in October for crossing at undesignated point along major Nairobi roads.

Most were arrested along Outering Road and Mbagathi Way, renamed Raila Odinga Way.

Nairobi county leads in terms of road crashes having recorded 439 accidents this year.
Counties
5 months ago

Some 439 crashes have been recorded, up from 397 last year.
Counties
5 months ago

Offending pedestrians were taken to a city court and fined between Sh500 and Sh3,000.
Counties
7 months ago