Call centre backed up with real-time surveillance cameras will assist in apprehending arsonists.

• A borehole and 100,000-litre tank with running water to fight fires wii be built. 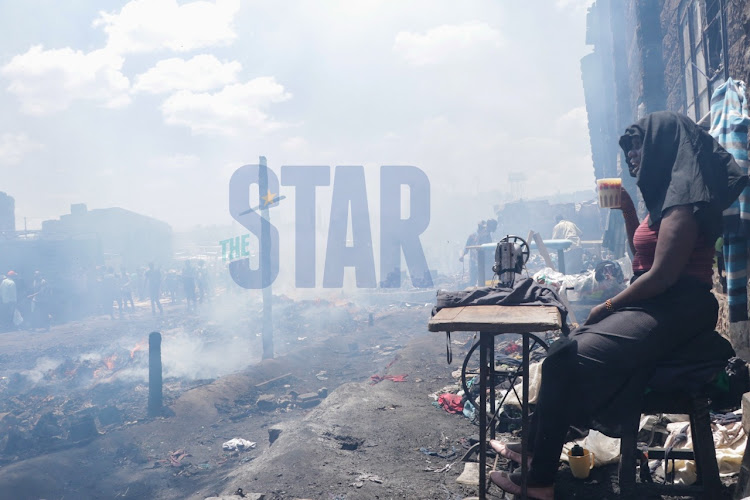 LIFE IN TATTERS: A woman at her sewing machine after a Gikomba fire.
Image: WILFRED NYANGARESI

Tragedy is routine at Gikomba market.

But now the government is counting on surveillance cameras and a call centre for the a new Sh3 billion Gikomba market to end the rash of fires.

The date of the opening has not been disclosed but Phase I is complete and Phase II is under construction.

Treasury Cabinet Secretary Ukur Yatani termed the frequent Gikomba fires an evolving act of terrorism that poses a risk to the economy.

“Gikomba market has fire outbreaks that have constantly been linked to arson attacks as opposed to natural occurrences. Fire outbreaks constantly evolving in the market pose a threat to thousands of self-employed traders," he said.

He comments are contained in the  2022 Budget Policy statement.

Without revealing the cost of the call centre and surveillance system, the CS said they will help arrest arsonists.

For decades, the market has been a source of income for many including food vendors, second-hand clothes traders, carpenters, other fundis and many more traders.

However, for many years  traders have constantly been in tears, losing their investments and having to rebuild. Most lack insurance and many have had to move away.

Mysterious fires in Gikomba market are a norm and no one has been arrested for the  the recurrent fires.

The Nairobi County Government and the National Government now is building a Sh3 billion, five-storey Gikomba market  in hopes of ending he 'routine' fires'.

Another fire razes down section of Gikomba market

Three months ago the same market went up in flames.
News
7 months ago

The three were discovered after the flame was contained, burnt beyond recognition.
Counties
9 months ago

Gikomba traders to be evicted for health centre expansion

Phase One of six-storey Gikomba Market ready for business

Phase Two will be twice the size of Block A
Counties
1 year ago
by MAUREEN KINYANJUI News Reporter
Nairobi
20 December 2021 - 22:00