Aladwa has declared himself as the ‘people’s governor'.

• The vocal legislator said that he will be seeking the ODM ticket for the seat, insisting that he is the best bet to take over the mantle as the fourth governor of the capital city.

• The Makadara MP will battle for the ODM party ticket with Westlands MP Tim Wanyonyi who has already launched his bid for the seat. 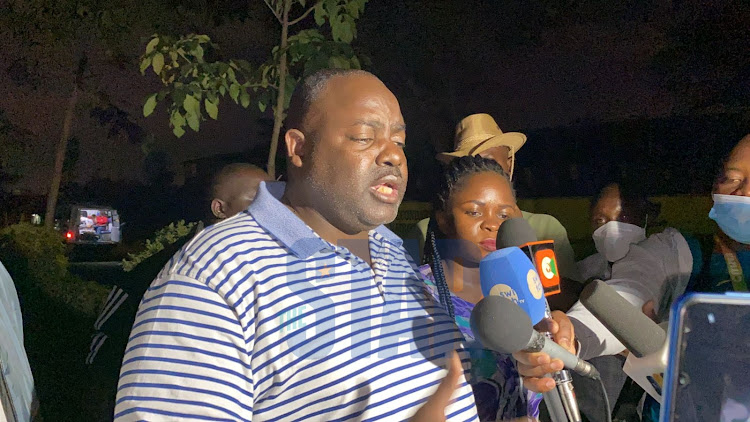 Makadara MP George Aladwa will officially unveil his gubernatorial campaign for the Nairobi seat in January 2022.

The vocal legislator over the weekend said that he will be seeking the ODM ticket for the seat, insisting that he is the best bet to take over the mantle as the fourth governor of the capital city.

“I want to make it clear that I will be in the race and I am doing it for the people because they want me to move to the next level,” Aladwa said.

He said this after attending a funeral mass in Makadara where he declared himself as the ‘people’s governor'.

“In Nairobi, people know the person who understands the city very well and that is why they want me on the ballot,” he added.

The Makadara MP will battle for the ODM party ticket with Westlands MP Tim Wanyonyi who has already launched his bid for the seat.

Sakaja said he believes Nairobi would be better and safer in his hands as he won't be a one-man show, will hire a city manager, get along with State House and permanently solve problems with transit and other master plans.

He said his predecessors Evans Kidero was too technical while impeached Mike  Sonko was too political and squandered goodwill.

Wanyonyi meanwhile believes he represents sober leadership and is a symbol of hope for Nairobi which has over the past eight years witnesses a cycle of theatrics.

Aladwa dismissed reports that he is out to divide the Luhya vote in Nairobi, noting that he has served long in Nairobi and understands the political terrain of city politics more than anyone else.

“ I have been a mayor and I am now the ODM Nairobi branch chairman and if it is about galvanising the Luhya vote, then I don’t think there is someone better placed to do it more than me,” he noted

The legislator further told people from Western Kenya who are asking about their stake in the next government if ODM leader Raila Odinga wins the presidency that Nairobi is one of the seats which they should unite to take.

“If Raila wins as long as some of us are alive then be sure that the Luhya community will be well represented but we are saying that Nairobi should be our pie for now as we bargain for other things,” Aladwa said.

"Nobody can just wake up and kick out secretary general of the party."
News
9 months ago

ODM recently advertised for applications by those interested in being its standard-bearer at the next polls
News
11 months ago
by MAUREEN KINYANJUI News Reporter
Nairobi
06 December 2021 - 13:17