•Badi said, through the Office of the President, NMS would ensure the families rebuild their homes.

•Since last month, hundreds of residents were left agonising over their next move after the government started demolishing their houses to pave way for a vital city link road. 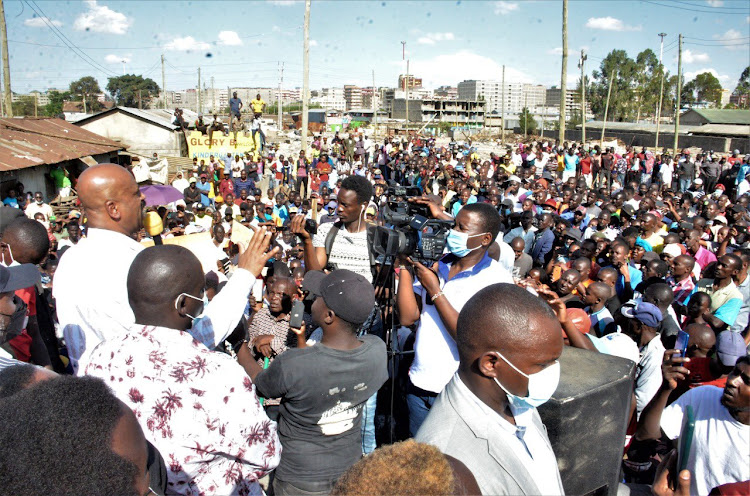 There is a glimmer of hope for Mukuru Kwa Njenga residents whose houses were demolished to pave way for the construction of roads.

This is after President Uhuru Kenyatta promised to cater for building materials.

“Through the Office of the President, NMS would ensure the families rebuild their homes,” Badi said.

Since last month, hundreds of residents were left agonising over their next move after the government started demolishing their houses to pave way for a vital city link road.

Those living on road reserves were asked to vacate for the expansion of Catherine Ndereba Road.

It will link the area to the Nairobi Expressway.

However, it appears the demolitions went beyond the intended marked territory which was initially to be on Catherine Ndereba Road that had been encroached on by the public.

This was revealed when Badi,  Nairobi County Assembly Majority leader Abdi Hassan Guyo among other leaders visited the area during the weekend.

Guyo said the President was shocked to learn that some residents were evicted and displaced despite their territory not being marked for demolitions.

In August 2017, the Nairobi City County officially declared Mukuru as a Special Planning Area, stopping any further development for two years until a Mukuru Integrated Development Plan is produced.

The declaration stopped development in the almost 650 acres area.

Mukuru people do not have access to basic essential services at an affordable cost.

One of the many objectives of the declaration was to develop ways that would promote the safety and health of the residents.

Currently, various projects are ongoing including the construction of boreholes, health centres and access roads.

Badi said no one will be left out when compensation starts.

He said the construction of access roads is to ensure ease of access of improved service delivery including better power line planning, speedy response during emergencies, ambulance services and fire response.

“All road reserves and roads will be marked. The other lands can be occupied but let no single structure be erected on the road paths,” Badi said.

The project will see over 13,000 housing units built in the area, which will be undertaken as a joint venture between the government and private investors.

Mukuru Kwa Njenga started with fewer than 4,000 people from across the railway to Njenga’s residence. Today, the slum has expanded to 113,000 people in eight zones.

Kwa Manyanga bar and restaurant across the road from Njenga’s residence is still in operation.