Hundreds of families have been left homeless.

• On Friday, Badi donated iron sheets for  the affected families to construct shelters in the mean time.

• Hundreds of residents are agonising over their next move. 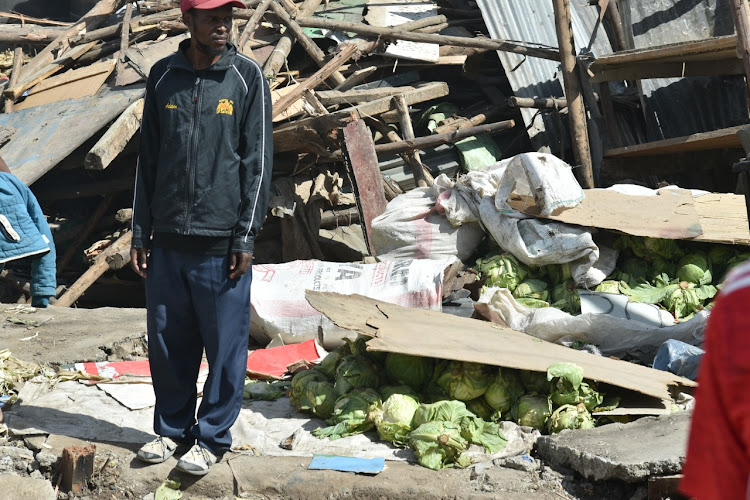 A hopeless man stands aside where he used to sell cabbages in his kiosk at Mukuru kwa Njenga on November 13, 2021
Image: MAUREEN KINYANJUI

A new twist has now emerged in the ongoing demolitions at Mukuru kwa Njenga that has left hundreds of families homeless.

It is emerging the demolitions went beyond the intended marked territory which was initially to be on Catherine Ndereba Road that had been encroached on by the public.

While addressing the affected residents, Guyo said the President was shocked to learn that some residents were evicted and displaced despite their territory not being marked for demolitions.

“The President has sent his regards because he  was told that the  demolitions happening were to pave way for road construction but it appears people have demolished outside the agreed territory,” he said.

“Any demolitions outside Catherine Ndereba Road are inhumane and not authorised by the government,” Guyo added.

He urged residents that encroached on around Catherine Ndereba Road to relocate to allow the construction of roads.

Being a man of few words, NMS boss Badi delivered Sh1 million from President Uhuru Kenyatta to the families that were unlawfully evicted and had not occupied the area near the earmarked road.

On Friday, Badi donated iron sheets for  the affected families to construct shelters in the mean time.

Hundreds of residents are agonising over their next move after the government started demolishing their houses last month to pave way for a vital city link road.

The government insisted that those living on road reserves must vacate for the expansion of Catherine Ndereba Road in the expansive settlement.

It will link the area to the Nairobi Expressway.

Nairobi regional commissioner James Kianda had earlier indicated that those affected had been compensated before the start of the demolitions on October 12.

Mukuru Kwa Njenga started with fewer than 4,000 people from across the railway to Njenga’s residence. Today, the slum has expanded to 113,000 people in eight zones.

Across the railway line is Mukuru Kwa Reuben, named after a white settler, Mukuru Kayaba, said to have been named after a Kei apple fence that marked its border.

Kwa Manyanga bar and restaurant across the road from Njenga’s residence is still in operation.