The three were discovered after the flame was contained, burnt beyond recognition 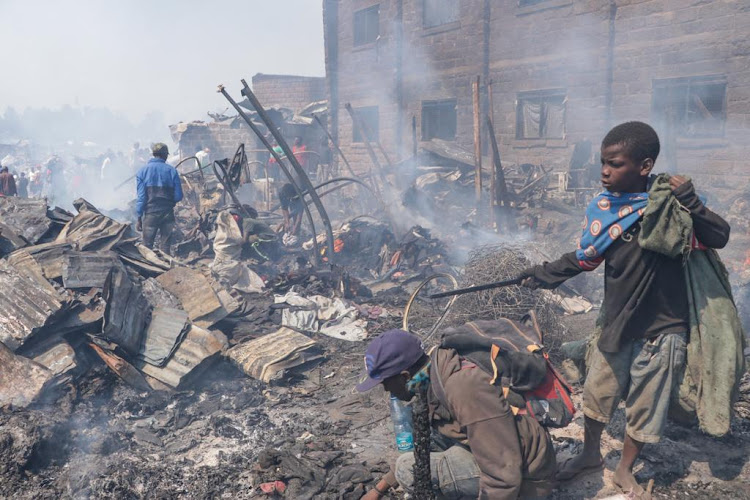 SLUM FIRES: What was left after a section of Gikomba market was razed down in a Monday 1am fire incident.
Image: WILFRED NYANGARESI

A mother and her two children were Monday night burnt to death in a fire incident in the Kangemi area of Nairobi.

Dagoretti police boss Wahome Muthui said the woman and her children aged seven and five were in their house when the fire broke out.

“They may have choked before they could run out and later collapsed as the fire spread,” he said.

Witnesses said the three were burnt beyond recognition.

Several structures were affected. The fire started from one of the houses and left scores of people homeless near St Joseph’s area.

A fire engine arrived at the scene, but it was too late to save the lives. The remains were discovered after the fire had been contained.

Muthui said they were investigating if the incident was the work of an arsonist. The three bodies were moved to a mortuary.

Elsewhere, houses were on Monday night razed by a fire that broke out in the Mlango Kubwa area of Nairobi. The cause of the fire had yet to be established.

Firefighters from the county rushed to the scene to contain the fire that broke out at 7pm.

Police said there were incidents of looting in the chaos.

Starehe police boss Julius Kiragu said they did not report any death, but there were slight injuries on residents who were fighting the spread.

“Many have been rendered homeless, but we hope help will come to resettle them. We are investigating the cause,” he said.

Many informal settlements have been reporting fire incidents on a daily basis in a worrying trend.

This has overwhelmed firefighters who at times run out of water in the struggle to contain the spread.

The firefighters also complain about the lack of roads in the affected places and want authorities to prioritise access roads in their development planning meetings.

On Monday, a fire swept through a section of Gikomba Market, affecting almost three acres.

Traders who arrived at the market were late as there was too little left to save.
Counties
1 year ago

Fire fighters from various government units including the KDF were on the ground battling to bring the blaze under control.
News
1 year ago
Post a comment
WATCH: The latest videos from the Star
by CYRUS OMBATI Chief Crime Reporter
Nairobi
09 November 2021 - 22:00
Read The E-Paper