• The restaurant, which prides itself as a social enterprise, hires and trains people living with disability for three months, then helps them find work.

• A waitress living with albinism, Angie serves customers who see her condition but do not understand the help she needs. 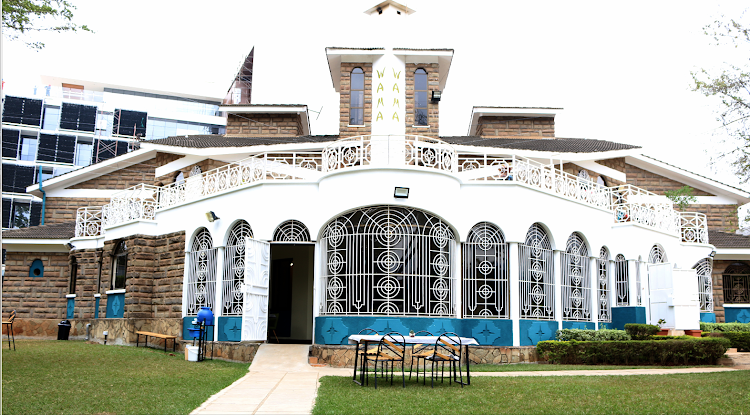 Off Muthangari Drive on Lavington Estate is a charming restaurant in an old colonial house with a manicured garden, intricate white facade, shade trees, exotic furniture and bold works of art.

It's called Wama Africa. Wama stands for wisdom, ability, motivation, and access. It is also a hotel.

Twelve of the staff are people living with disability—albinism often with visual impairment, hearing impairment or physical disability, sometimes requiring a wheelchair.

Wama trains them for three months, 12 at a time, then helps them find work in the hospitality industry.

"We decided to give the restaurant a name that reflects our beliefs," jovial owner Adam Sargeant tells the Star over a cup of coffee. He is not living with a disability.

The quiet boutique restaurant is a gem with corners of surprises, including art, abstract and representational, a working fireplace near a carved wooden tree embedded with crystals.

It can seat 200 people indoors and in the garden, so the PWD staff are joined by others.

At the entrance, decorated with a fish pond and exotic plants, a woman living with albinism and a man in a wheelchair welcome us.

The woman, waitress Angie Ndonye, shows us around before we choose a table for lunch.

One room has been converted into an art gallery, with about 15 works in oil and acrylics, nails and thread, charcoal and pencil.

When we decide to sit in the sunny part of the garden, Angie is a little uncomfortable because it's bright and hard on her eyes. We don't notice. She asks if we're okay and then, as it's hot, we decide to move inside where it's cooler and dimmer.

As a waitress living with Albinism, Angie has to deal with clients who despite seeing her condition, do not immediately understand the care they need. Apart from vision issues of varying degrees, and needing sunscreen, most people living with albinism are as healthy as anyone else.

Angie, a 27-year-old mother of one, has been working at Wama since it opened in July.

People with impaired hearing are the eyes of people with albinism. And people living with serious vision problems are the ears of people who are hearing-impaired. So they are often teamed up.

The integration and teamwork make for seamless service. 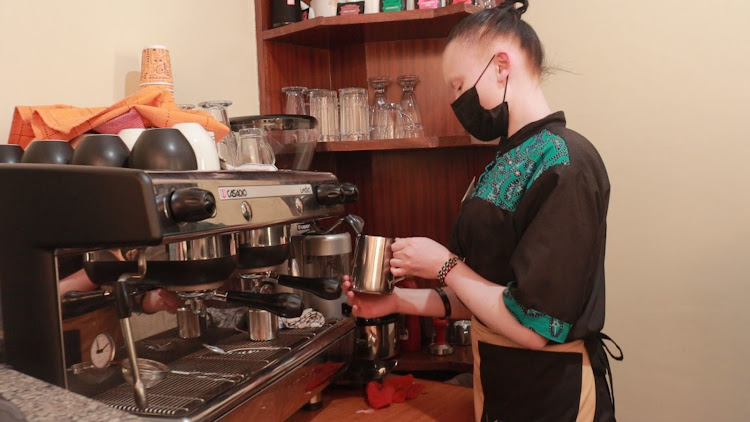 Benard Sire, a bartender living with albinism, has been working at Wama for two months after losing his job at a restaurant in Karen. He was laid off due to Covid-19 restrictions.

"It's easier and more fulfilling to work with people living with disabilities as they are more careful," Sire said.

"They are self-aware and, therefore, much keener."

He said feedback from patrons is very good. "Clients really love working with the staff."

Sire said initially some waiters would give an incorrect drinks order due to communications problems. Because of embarrassment, they would sometimes decline to take it to the guest.

“Now we have Ipads that they show the guests who pick their order. It is sent directly to the kitchen," Sire said.

Angie, whose educational background is in community health, said a Wama codirector interested her in the trainee position.

“She knew my interest in the hospitality industry and when the opportunity came up, she took me in. Here we are trained for three months before being posted to other restaurants,” Angie said.

Mary, a waitress trainee with a hearing disability, carries around an Ipad, which she uses to communicate with guests. She is also very good at reading lips, so she can understand without having to write it down.

Mary takes me on a gives me a tour of the restaurant while jotting down key details on her tablet for me to read. She gestures at interesting places I should note.

Afterwards, owner Adam Sargeant is delighted to discuss the establishment.

Adam works with Dr Prabha Choksey who runs an albinism foundation to interview and recruit his team. He does a lot of advertising and consulting with his partners to choose the applicants who can benefit the most from training.

First, they give the trainees a two-week introduction to familiarise themselves with the industry and what best suits them.

They also get training on how to overcome their fears and difficulties in communication.

Then follows a three-month paid training course with professionals and hands-on experience in specialised areas.

The aim is to integrate them into the hospitality industry, break down mental and workspace barriers and stigma associated with people having special needs.

Sargeant was undeterred about opening a restaurant during a global pandemic and a special-needs team.

‘I’ve also been passionate about training and hospitality, so combining the two I started a social enterprise that was important to me," he said.

"During Covid-19, I watched foundations that rely on grants and funding cut down on staff, so I decided to start a social enterprise that funds itself," the owner said.

"One challenge is that some trainees with albinism, have really poor eyesight. You can literally wave at them from a distance and they wouldn’t be able to see you.

"We try to solve that by pairing them with a trainer who oversees their work and coaches them. But we also let them work together as a team," Sargeant said. 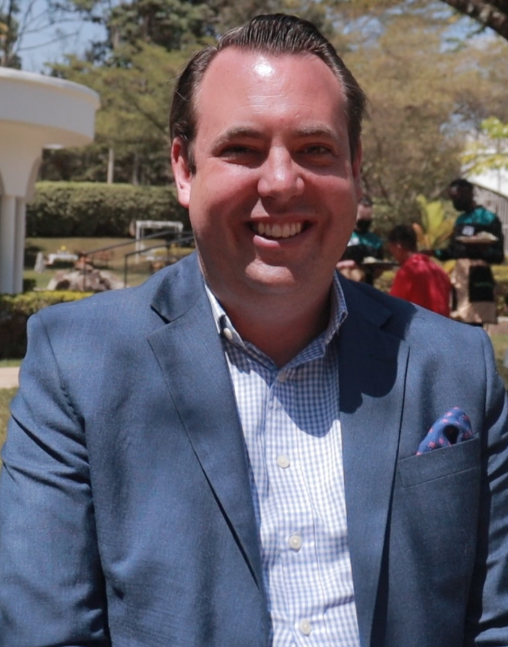 "Our training hours are limited because of the curfew but we are learning to be adaptable," Sargeant says.

Before he joined Wama, he was pursuing a diploma in business management.

"But hospitality has been my dream, so when I heard about Wama I quickly jumped on the opportunity and sent in my application."

Most of the time, clients do get a little surprised, seeing her and her colleagues working in a restaurant and hotel, especially out in the sun.

"They usually comment on how impressive it is and they are really kind. I have not faced any discrimination in the one month I’ve been working here," she says with a broad smile.

"I look forward to being a renowned entrepreneur in the future, but for now hospitality is everything for me," Wamula says. Maybe she'll resume business school.

Michael Sichemo, the head chef at Wama Africa, said he enjoys working with a team of special needs people. He is fond of them.

"It reflects the diversity and beauty of inclusion," Sichemo said. He is not living with a disability, though he does have a slight limp.

"Despite the challenges facing them," he said, "they really put themselves out and work extra hard."

PWD tell IEBC to include deaf Kenyans during voter education

• The National Council for Persons With Disabilities and the Integrated Development Facility said the exclusion has also happened in previous ...
Counties
7 months ago

Organisations say people with disabilities have been left out of priority groups
Counties
9 months ago
by HANNIE PETRA
Nairobi
05 October 2021 - 22:00