The bullets have been linked to ongoing Laikipia clashes, police say they were to be ferried there 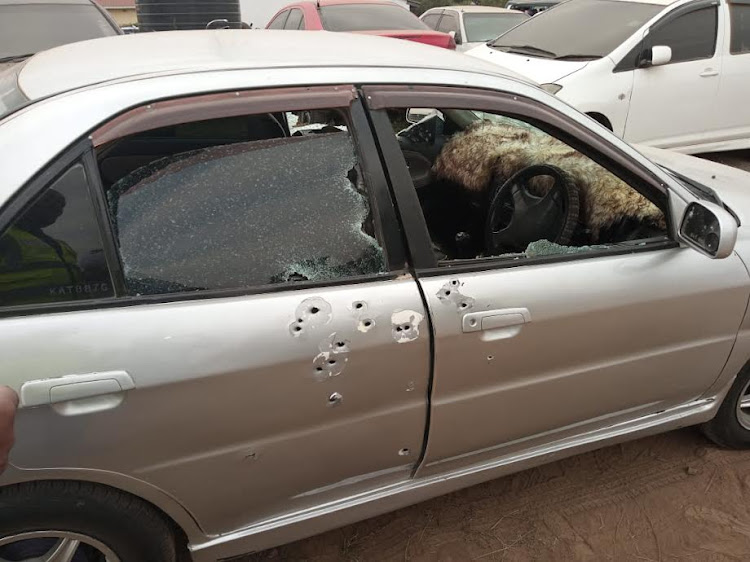 COLLUDING WITH CRIMINALS: A senior GSU officer has been arrested over the 2,040 bullets found in a salon car, that was shot at over 20 times by an unknown gunman on September 14 in Utawala, Nairobi.
Image: NPS

A senior GSU officer was Wednesday night arrested after he was linked to a cache of bullets seized from a crime scene in Utawala, Nairobi.

The inspector of police based at the General Service Unit training college was arrested after investigations linked him to 2,040 bullets found in an abandoned car.

The bullets are used in AK47 rifles.

Police said the officer was behind the said bullets.

The salon car in which the bullets were found was shot at more than 20 times by an unknown gunman in an apparent rage on Tuesday.

Police said locals informed them of gunshots in a garage. On arrival, they found the car riddled with bullet holes.

Inside the Mitsubishi Lancer were 34 cartons of bullets in a sack. The cartons each containing 60 bullets were in the backseat.

No one was found in the car. Police suspect it was a case of a deal gone sour.

A witness told the officers that the car had been driven to the scene and abandoned. A few minutes later, another car drove in and a gunman alighted. He fired over 20 bullets at the first car. They then sped off.

The witness said the gunman acted in rage and it seemed he thought the target was in the car.

The scene is near two key police training colleges belonging to the GSU and Administration Police.

The bullets have now been linked to the ongoing clashes in Laikipia and police believe they were destined for the region.

The gunmen attacking locals have been using bullets similar to those seized on Tuesday night.

A similar cache of 2,640 bullets was recovered last month by rangers from West Gate Community Conservancy in Laikipia.

The rangers are part of a larger team in the operation to drive out herders from private ranches.

Two men who were riding on a motorcycle dropped off and ran on foot leaving a sack containing 44 boxes of 7.62mm ammunition with 60 rounds in each of them.

Police believe the source was the same as the ones recovered in Nairobi.

Nairobi police boss Augustine Nthumbi said they are investigating the motive and will soon establish if there were more players in the deal.

“The ownership of the car, bullets and shooting are part of what our teams are investigating for now,” he said.

A team from Special Service Unit is now casting their net wider to establish if the officer and his group could be behind other incidents.

“They will conduct a thorough audit on all other areas to check if the trend is more than what we know,” a senior officer aware of the probe said.

However, the officer termed the incidents isolated cases.

Police believe similar bullets are being used for criminal activities in the country.

Bandits also use bullets whose origin is hardly known. Criminals too buy bullets from merchants in a trend that is worrying amid campaigns to address the menace.