• Raised by a single father in a family of 10, Rachael learned learned to work hard. She wants to be a quantity surveyor and likes working in construction.

• Despite problems with some male workers, she says no job is only for men. Women can do anything they do, often better, says Rachel. 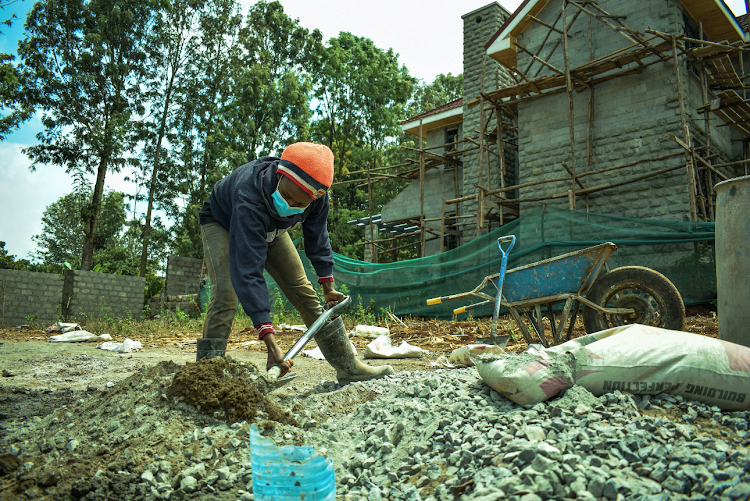 Rachael Makena puts on her dirty blue jeans, covers her stylish curly hair in an orange cap, then wields a shovel, hammer or trowel laying bricks at a construction site.

She hauls bricks and sacks of cement, too.

She doesn't shy away from getting her hands dirty and doesn't mind the callouses and broken fingernails.

Rachael is just 24 and is studying for a diploma in Quantity Surveying at the Technical University of Kenya.

"But I believe we women can take up men's jobs and work even better. I'm a good example of women proving we women can do it."

Her male contractor and some, not all, male coworkers are full of praise. Some don't take her seriously.

Construction work from Thursday through Saturday helps her raise fees. It also gives her hands-on experience for her future career. She enjoys it.

The resident of Bahati, Nairobi, began working on construction sites in 2017 and has been it ever since. She also sells shoes and underwear online.

“I was introduced to construction work by my brother. I started just after high school to make money for myself,” Rachael said.

Raised by a single father in a family of 10, she said had to learn to work hard and persevere from an early age.

“I was born in Chuka, Tharaka Nithi, the ninth among 10 children. My mother died when I was very young so my dad raised us and he taught us how to work hard in life,” she said.

On Monday, Tuesday and Wednesday, Rachael goes to class. The rest of the week you'll find her at different construction sites, mainly in Nairobi and Kajiado counties. She goes where her contractor sends her.

She pays part of her school fees, her elder brother, sister and father pay the rest. Both brother and sister worked in construction; now he's a successful contractor and she owns a real estate company.

Rachael's interest in construction began when she was still in school and she saw a collapsed building near her home. 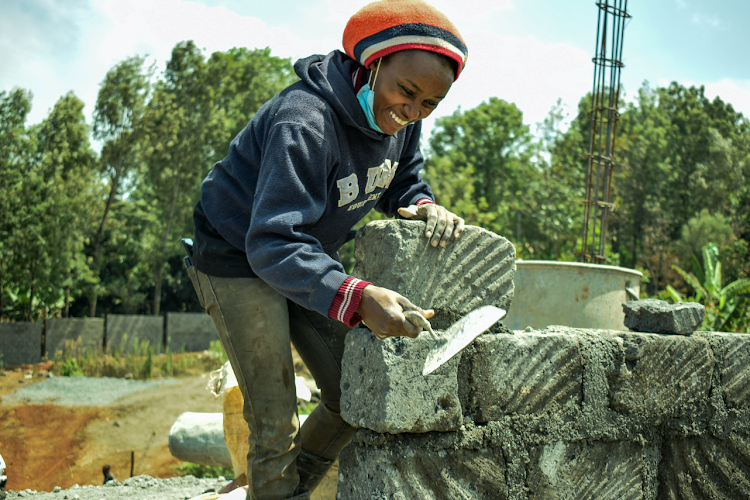 “I was in Form 2 and went to see the collapsed building. It was fascinating," she said.

" I wanted to know what caused the building to fall. "

After seeing her interest, her elder brother advised her to take a course relating to construction and that's what she did

When she began her male-dominated university course, there were only five young women out of 35 students. Now she is one of two women.

The course is challenging with quite a bit of math, science and engineering. Quantity Survey is perceived to be a male-dominated career. Rachael wasn't deterred.

At her first industrial attachment, the surveyor at the site was a woman. "This really boosted my confidence and made me persevere studies and work,” she said.

Women in the field, especially young ones, face difficulties because at some sites men don't take them seriously. They make work difficult.

“At some sites, male supervisors or workers undermine our potential, saying a woman can’t do certain jobs. Sometimes they don’t assign jobs to you," she said.

Rachel has to prove herself and demonstrate she can work as well as a man, if not better.

Some men and women discourage a young woman from doing a mjengo job.

"All you have to do is keep going and always remember what made you take up the job in the first place. Just work diligently," Rachael said.

Family and friends encourage to keep going and be a trailblazer for other young women in the industry.

Her older brother and sister always motivate her since both did construction work and now they're successful.

Her contractor Solomon Murithi praised Rachel's good work on all projects she has been assigned.

“Makena has been a hardworking woman at every site where I assigned her," he said.

Sometimes he wonders how she does all kinds of work, even carrying heavy bricks and cement.

“When you employ a woman, she works extra hard, even harder than some men so she can prove herself and keep her job," Murithi said.

He pays Rachel and her male coworkers the same. 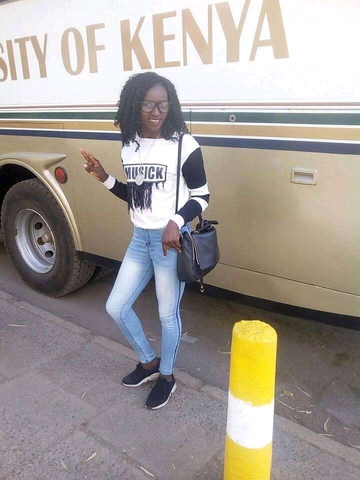 Coworker Henry described Rachel as determined and energetic, always showing up and giving it her best.

"I've never heard her complain the work is too hard. She does it perfectly, if not better than others, he said.

Rachael is also a talented football player and entrepreneur.

Her side hustler is selling shoes and women and men's undergarments to fellow students online.

“I am a footballer and the captain of the Technical University of Kenya  football team. I also do sell shoes and both men and women’s undergarments online," she said. 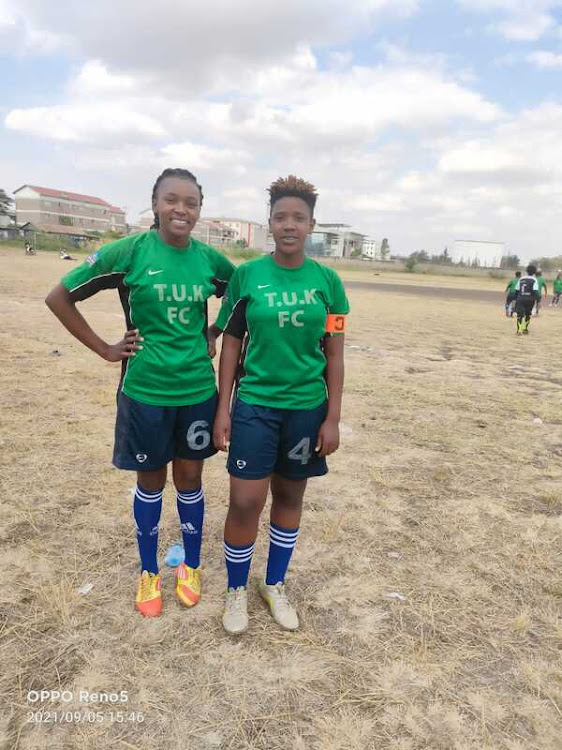 FOOTBALL CHAMP: Rachael Makena and Rose Nawire during a football match at the TUK grounds in South C on August 6
Image: COURTESY

Rachael advises jobless young people not to be choosy when looking for work.

“Many youths claim there are no jobs in the country because they only want white-collar jobs. They forget whether you do  white-collar jobs or odds jobs, we are all in search of the same thing, money. Stop being selective,” she said.

“There is no shame in doing odd jobs.

"For ladies, there is no law stating a certain job is meant for a specific gender." she said. "You just have to avail yourself and do your best. We don’t have to depend on so-called ‘sponsors’."

No sponsor for me: Murang'a woman a student by day, guard by night

She deplores 'lazy' women who take sponsors to support their lifestyle.
News
1 week ago

Most people think Esther is thriving in the US on a scholarship but she's struggling.
Counties
1 month ago
by CHRISTINE NTINYARI and SELINA TEYIE
Nairobi
09 September 2021 - 22:00