This is even as the city county continues to suffer frequent fires, especially in the informal settlements and markets

• The county relies on the Khoja fire station on Tom Mboya Street, which was built in 1907, and another at Industrial Area built in 1957.

• This is even as the city county continues to suffer frequent fires, especially in the informal settlements and markets, leading to loss worth millions of shillings. 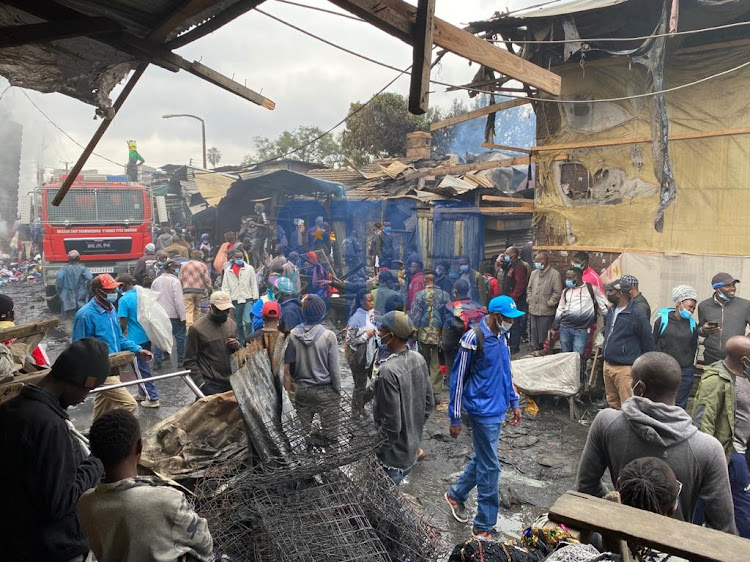 Gikomba traders salvaging what is left after the morning inferno on August 6, 2021.
Image: MAUREEN KINYANJUI

With a population of more than four million people and 58 years after independence, Nairobi still relies on only two fire stations.

The county relies on the Khoja fire station on Tom Mboya Street, which was built in 1907, and another at Industrial Area built in 1957.

This is even as the city county continues to suffer frequent fires, especially in the informal settlements and markets, leading to loss worth millions of shillings.

With the infrastructural development and increase in population in Nairobi, traffic snarl-ups are witnessed almost throughout the day until the curfew hours. And like matatus and personal cars, fire engines are also not spared from traffic jams.

Through the county funded projects, World Bank has constructed two fire stations in Kangundo Road and Waithaka, which were completed last year.

The Nairobi county government is yet to commission the two fire stations.

Following the latest fire incident on Friday at Gikomba Market, traders accused the county government, which is in charge of disaster management, of slow response.

Some even claimed the first fire engine to arrive at the scene didn't have water.

When the Star reached out to City Hall's director in charge of Fire, he couldn't give an update on the incident.

"I cannot comment on the issue until you get cleared by the Director in charge of Communication at City Hall," he said.

City Hall's director of Communications Beryl Okundi did not respond to calls.

In February, it was revealed that the delay of container clearance from the Inland Container Depot caused a setback in the opening of two newly constructed fire stations in Nairobi.

The container, according to Devolution executive Vesca Kangongo, has the equipment that is part of Phase 1 of the official aid-funded project  to be installed in the two fire stations completed over a year ago.

The county government is yet to communicate when the completed fire stations will be commissioned.

A third fire station, funded by the Belgian government,  is set to be constructed in Gigiri near the American Embassy

City Hall was to construct the station after repossessing the grabbed land from a private developer, who had converted it into a business complex in 2019.

The county had announced that it has already recruited 300 firefighters, who will be deployed at the fire stations once commissioned.

A report from City Hall in September 2019 revealed that Nairobi had only 120 trained firefighters, with 11 set to retire at the end of that year and 13 in 2020.

Fire engines get their water supply from the 4,044 hydrants in Nairobi.

Most of the hydrants were damaged during the construction of the Thika Superhighway.

The functioning hydrants are located at Globe roundabout, Runda, Kijabe Street, Safari Park, one at James Gichuru and three in Industrial Area.

World Bank is constructing boreholes along Enterprise Road, Kangundo Road, Tom Mboya street, Waithaka and Dagoretti to assist in places where the hydrants have dried up.

Post a comment
WATCH: The latest videos from the Star
by MAUREEN KINYANJUI News Reporter
Nairobi
09 August 2021 - 11:35
Read The E-Paper