Area MCA condemns destruction of houses, says there is an ongoing court case over the land 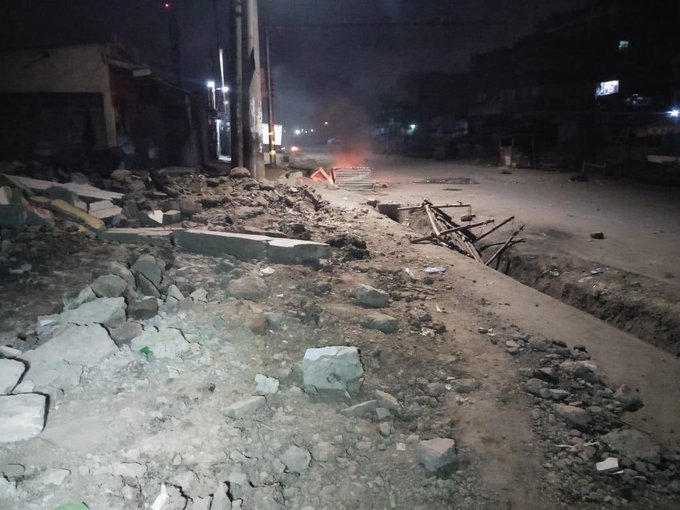 Dispute over ownership of the 275 acres of land  between Kiambu Dandora farmers company and residents has intensified in Mowlem Ward, Nairobi.

Residents of Kwa Maji area on Wednesday night held demonstrations to protest against demolitions of their houses by a private developer.

According to the residents, they were ambushed at midnight without any prior notice of the demolitions.

They lit bonfires on the road disrupting traffic along Kangundo road.

Mowlem MCA Benson Mwangi who condemned the demolitions told the Star that there was an ongoing court case over the land.

“How can you demolish people’s houses yet there is an ongoing case over the disputed land? he posed.

The MCA further questioned why the residents were chased away by police and had tear gas lobbed at then while they were demonstrating peacefully for their rights.

“It is inhuman and illegal to evict people from a piece of land that they own. Why are the concerned people not patient enough to wait for the court ruling?” he questioned.

Owners of the demolished houses claimed they had bought the land from a local bank.

The same was confirmed by the MCA who said the residents bought the disputed land at  Sh80 million and the land was then subdivided.

They called upon the bank to solve the issue as it had sold the land to them.

The Umoja Three parcel of land case has been in court for years.

In court papers filed in 2011, Kiambu Dandora farmers were embroiled in a land dispute with another company named Dandora Housing Scheme where they were to sell their land but declined.

The move saw the attorney general for commissioner of lands attempt to acquire the land compulsorily under the land acquisition Act and this has led to several other matters in court.

In September 2019, a witness claimed that 818 acres belonging to Kiambu Dandora Farmers Company gazetted for urban development was allocated to senior government officials.

Director of the firm Abdillahi Mwigai testified that since it was an attempted compulsory acquisition in 1974, which did not go through, members of company have never been given compensation from the government.

However, all the five nominated trustees, who received title deeds and grant orders of the company, are deceased.

Court documents seen by the Star show that Justice Samson Okong’o barred any interference with the plot on August 20, 2019.

“... the 8th respondent be and is hereby restrained from either by themselves, directors, agents, servants, employees, or otherwise howsoever from entering, unlawfully acquiring, taking over possession and constructing structures on all properties known as L.R Nos Nairobi Umoja Block 107/1118-1134,” the court orders read in part.