Houses are barely a meter apart with up to eight people per room; social distancing is next to impossible

•Residents of informal settlements make up nearly half of Nairobi’s population yet there are crammed into only five per cent of residential areas.

• More than 60 per cent of businesses in informal settlements were closed during the partial lockdown, exposing thousands of families to serious economic hardships. 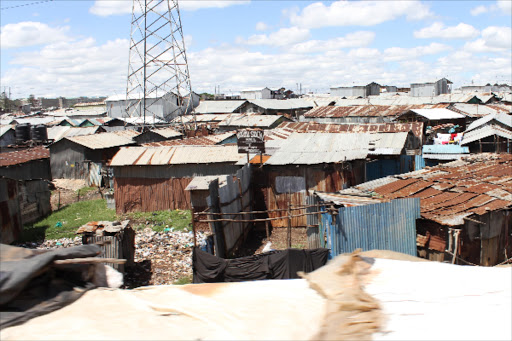 HARD KNOCK LIFE: Mukuru, one of the biggest slums in the country.
Image: FILE

As many as 60 per cent of all reported cases of Covid-19 infections in Nairobi between March 5 to July 5 were from informal settlements.

A report by the Human Rights Watch dubbed ‘ We are all Vulnerable' released this week on Tuesday said.

However, these settlements have been divided into 14 smaller neighbourhoods with 158 village clusters.

“With houses barely a metre apart and up to eight persons per room, social distancing is next to impossible,” the report reads.

Residents of informal settlements make up nearly half of Nairobi’s population.

According to the 2019 population census, roughly 10 million people are living in informal settlements across Kenya with 2.4 million in Nairobi.

“Inadequate and unreliable water supply and poor sanitation negatively impacted the ability of residents to regularly wash their hands," the report reads.

After the first Covid-19 case was reported in March last year, the government put in efforts to curb the spread.

They stationed various washing points across the slums and markets where consumers can observe hygiene by washing their hands with soap and water.

The research by Human Rights Watch was based on interviews with 136 people including 102 residents of 11 informal settlements out of which 82 were women.

It focused on Nairobi in part because it has the fastest growing number of informal settlements in the country.

It states that more than 60 per cent of businesses in informal settlements were closed during the partial lockdown, exposing thousands of families to serious economic hardships.

Partial lockdowns and curfews, were noted to be more challenging to adhere to in informal settlements and had harsher economic consequences.

Many residents told Human Rights Watch they could not afford to adhere to stay at home measures because they are dependent on casual day jobs.

Despite continuing to leave home to earn a living, residents attested to extreme economic hardship .

Many said they lost their jobs, earnings or were forced to shut down their businesses. They also struggled to make ends meet after they missed out on government supports.

“It was very tough for me during the lockdown. My laundry work stopped because people stopped giving us clothes to wash. They were afraid we would infect then with the virus,” 39-year-old mother from Kayaba said.

"At home, we would have just one meal a day and at some point, we started going without food,” she added.

The agency estimated that the formal sector only generates enough jobs to absorb around 20 per cent of young people newly entering the labour force. The remaining 80 per cent find work in the informal sector.

Most youth and other residents of informal settlements fall into the category of unemployed youth.

“I used to make around Sh200-Sh300 from washing clothes. During the pandemic, work became very difficult to come by,” 28-year-old mother of two from Kayole Soweto said.