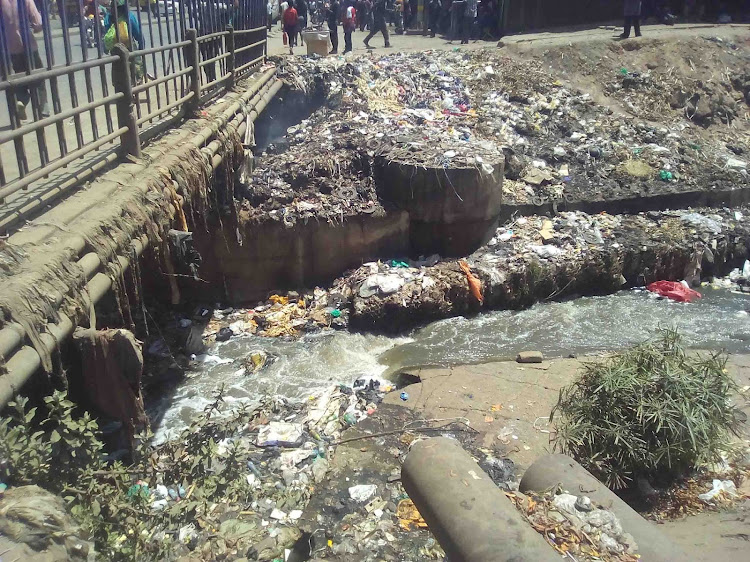 FILTH: Nairobi River with sewer pipes draining human waste. Only 48 per cent of the population is connected to sewer systems.
Image: COURTESY

Sewer systems in Nairobi and satellite areas are being restored with Sh10 billion from the national government and the African Development Bank.

The project that began this month is part of the efforts to provide more clean water and sanitation.

Water CS Sicily Kariuki said the project aims to provide proper sewerage for city residents and those within the outskirts.

The Water ministry has a similar project addressing issues of sewerage and sanitation coverage improvement within Nairobi and its environs.

This is in partnership with the French Bank where another Sh10 billion is being put in use.

Only 48 per cent of the population is connected to sewer systems, a documentary by Athi Water Works Development Agency on Independent community free water supply projects shows.

Kariuki said the government is implementing an ambitious plan to boost access to sanitation facilities in the next 5 years and rehabilitate city sanitation infrastructure.

The Nairobi regeneration programme was launched in 2017. It aims to improve city water and sanitation and enhance sanitation facilities for residents. The focus is on informal settlements.

Before the launch only 46 per cent of the city population had coverage of sewer lines, this has increased to 48 per cent.

The programme targets to reach 65 per cent and ultimately by 2030, with enhanced financing about 80 per cent might be covered.

“We are focusing on rehabilitating burst sewer lines in the city, particularly in informal settlements,” the CS said.

The Water ministry is also providing ablution facilities within the slums.

With such facilities, sewerage can then be contained and managed in a manner that does not find its way to the rivers.

Already, Athi Water has constructed 15 ablution blocks in Kibera with residents now having a more hygienic way to dispose of solid waste.

This will also help eradicate the famous flying toilets that have been a menace and a threat to the general hygiene of the informal settlement.

The ablution blocks are also connected to sewer lines.

This is part of the Sh1.6 billion Nairobi City Regeneration Programme.