It has also made life easier for landowners and buyers

• The system was launched by President Uhuru Kenyatta in April.

• The platform requires the Lands ministry to digitise land records, streamlining records of transactions and ownership. 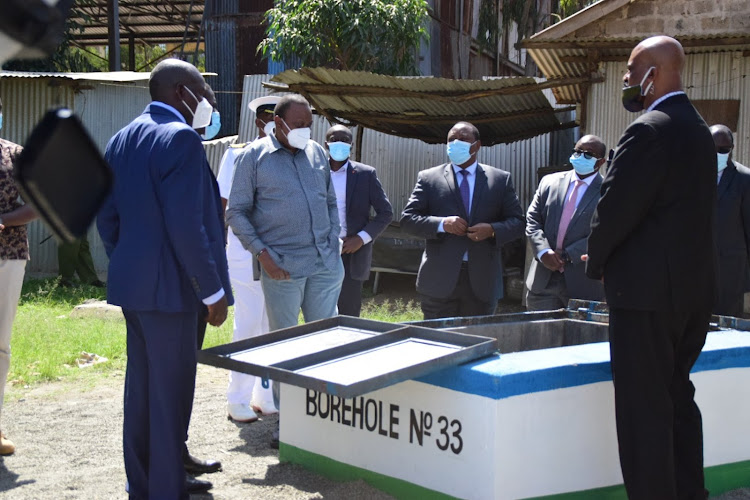 GETTING IT RIGHT: President Uhuru Kenyatta and, among others, Nairobi Metropolitan Services director general Mohamed Badi at a Kibera water borehole on June 30.
Image: MAUREEN KINYANJUI

City residents with fake title deeds will be unable to use them following the transition to the National Land Information Management System.

“When NMS started issuance of title deeds it was a nightmare for us because of fake title deeds," he said.

“But now with digitisation from the Ministry of Lands, we'll be able to get hold of all those con people who have hold of fake title deeds.”

The system was launched by President Uhuru Kenyatta in April.

The platform requires the Lands ministry to digitise land records, streamlining records of transactions and ownership.

It is aimed at eliminating fraud, corruption and manipulation of critical land records. It is also expected to reduce the long queues at the registries.

Ardhi Sasa has limited or removed the human element and interaction as much as possible to frustrate land cartels.

It has also made life easier for landowners and buyers who endure frustrations at land offices countrywide.

According to NMS, inheritance problems involving disagreements among family members delayed the process.

Administrative issues contributed to the setback while NMS had to make new arrangements to allow for compliance with Covid-19 protocols.

President Kenyatta launched the issuance of Eastlands title deeds on May 30, 2018, at Jacaranda grounds in Embakasi.

He was to issue 50,000 documents, but the process was halted in 2019 after the discovery that the land had been allotted illegally.

At the time, former Governor Mike Sonko said his administration would conclude the exercise after an audit to identify the genuine landowners.

The governor said land grabbers were among those listed as the beneficiaries and had to be removed from the list.

Another setback was the requirement that the property owners pay the Sh30,000 legal fee before their title deeds were processed.

A further 28,000 title deeds were to be issued to members of Embakasi Ranching Company in the ongoing national titling exercise in which over 500,000 documents have been issued since 2013.

In April, Lands Cabinet Secretary Farida Karoney indefinitely postponed the issuance of the documents to comply with the revised Covid-19 control protocols.