• Pedestrian walkways coloured in grey and cycle track in red

•The NMT project is part of the Nairobi Urban Mobility Plan being implemented in collaboration with NaMATA and other road agencies in the country. 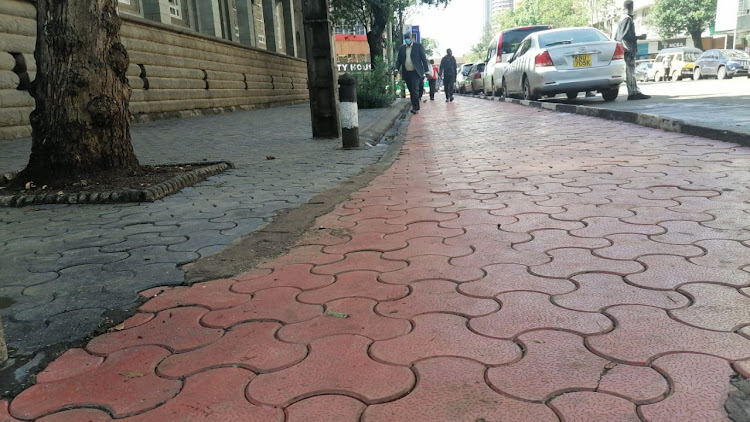 USE YOUR FEET: The Non-Motorised Transport along Wabera Street on April 22, 2021. Red is for bicycles, grey for pedestrians
Image: CHARLENE MALWA

Pedestrian walkways and cycling paths will be expended in the city for Sh1.4 billion to reduce traffic congestion and improve safety.

The Nairobi Metropolitan Services is building the Non-Motorised Transport corridors, grey for pedestrians and red for the cycling tracks.

Non-Motorised Transport lanes will cover 116km, in three packages outlined in the Fiscal Strategy Paper for 2021-22.

NMS director-general Mohammed Badi has said NMT lanes will be expanded from the CBD to other areas.

More NMTs have been created within the CBD and beyond. Contractors have built more, even within Uhuru Park to Hurlingham and are working on more along Jogoo Road and in Westlands, Badi said.

NMT is also a strategy to slowly phase out on-street parking in a wider plan to decongest the capital.

The first part will cover 36km, with the NMT corridor spreading into Eastlands.

NMTs will cover 10km from the Jogoo Road corridor to the CBD from Outering-Jogoo-Landhies-Haile Selassie. Bicycle parking will be built at the Kenya Railways Station. The works will cost Sh155 million.

Ten kilometres from Juja Road to the CBD from Outering Road Ngara-Race Course will terminate at Landhies Roundabout. It will cost Sh155 million.

The second part will cover 55km from the CBD to Westlands and Ngong Road areas.

NMTs will cover three kilometres for Sh46.6 million along Enterprise from Lusaka to Likoni Road intersection.

The  NMT works started last year in the CBD. Kenyatta Avenue, Wabera Street and Muindi Bungi were upgraded with corridors.

The NMT project is part of the Nairobi Urban Mobility Plan in collaboration with NaMATA and other road agencies.

Phase one of the project follows Nairobi River from Donholm all the way to Westlands and Eastlands so that people can walk or cycle into CBD, Industrial area and Westlands.

The second phase joins phase one at CBD and goes to Lang'ata via Railway City while phase three is from CBD to Roysambu through Ngara.