• Kura director general Kinoti said a change of tactics to reduce spending on other projects will bring accessibility to slums through access roads.

• In a separate project within the 11 informal settlements, 30.64km have been completed. 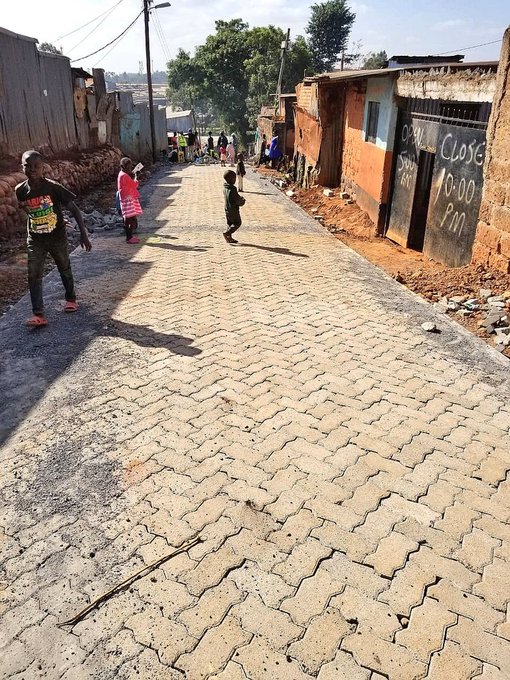 SLUM ROADS: A section of the 43.6km of access roads constructed by Kenya Urban Roads Authority on April 2
Image: COURTESY

Mud, puddles and blocked access will soon be in the past as Kura completes 43.6km roads in 11 informal settlements.

“This has greatly improved the dignity of residents who need not to wade through the mud,” Kura director general Silas Kinoti said.

The project is part of the Sh5.8 billion upgrade of 408km of access roads across informal settlements in Nairobi county. Drainage is also built.

Kinoti's team said that as of April 2, 43.6km had been completed.

In Roysambu 50.7 km will be upgraded; Githurai 57.4km; Kasarani Mwiki 42km; Dandora, Utawala, Mihang’o and Ruai will have 40km.

Kura corporate communications officer John Cheboi on Thursday said some areas will get both cabro and bitumen.

“Areas that always have stagnant water will get cabro but areas without complications will get bitumen. Githurai and  Ruai will get both types of roads,” he said.

Works have also started in Kibera, with just 1.37km done, Mathare with 1.32km and Roysambu with 4.8km.

Cheboi said most areas have suffered from poor road networks and lack of accessibility, making it difficult to respond promptly to fires, health emergencies and other problems.

“Once we complete these projects, wearing gumboots every day because of muddy roads and stagnant water will be history. People deserve better roads,” he said.

The roads will be a lifeline in slums because they will help reduce water-borne diseases due to poor sanitation and stagnant water," Cheboi said.

Roads will also open opportunities for other developments.

Kura’s Kinoti has said the roads will be an infrastructure game changer in informal settlements.

He said Kura will also build road furniture, including walkways and cycling lanes where space is available.

Kinoti said a change of tactics to reduce money on other projects will lead to the development of roads project in slums.

“We had started the road projects through the Nairobi Regeneration Programme which ended up covering a few kilometers but we spent a lot of funds, which was not practical,” he added.

The Nairobi Regeneration Programme started in 2018 was a collaboration between the county and national governments.

“With experience from Phase One of the regeneration programme, we saw it would make sense to do standard roads,” Kinoti said.

“We wanted to do what we refer to as low-cost roads and do more kilometres. We presented the idea to the Transport ministry and President—doing 408km with Sh5.4 billion,” he said.

The first phase covered 79.4km of 38 roads in Eastlands and the city centre for Sh2.8 billion.

Kinoti said with little traffic in informal settlements, what was required were access roads to open up and connect the areas to the city centre.