Democracy activist and no-nonsense manager honoured three years after his death on April 15, 2018

• MCAs agreed renaming the road will be a fitting tribute to a man who made sacrifices for a better Kenya.

• Roads and Transport Executive Mohammed Dagane supervised the change of signposts in the CBD. 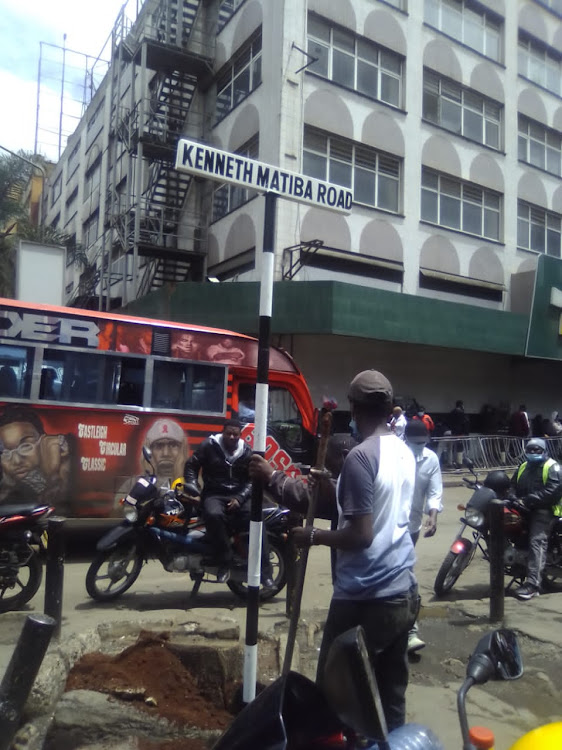 One of the Nairobi Central Business District's busiest roads has been renamed Kenneth Matiba in honour of the veteran politician.

MCAs agreed that renaming the road would be a fitting tribute to a man who made many sacrifices for a better Kenya.

While moving the motion, Nairobi Central MCA Daniel Ngegi said not much had been done to honour Matiba despite his enormous contributions.

“This assembly urges the county executive and NMS to rename Accra Road in Nairobi Central Ward to Kenneth Matiba Road in honour of the pro-democracy icon. He was a pioneer in pressing for the return of multiparty democracy in the 1990s,” he said.

The legislator said renaming of the road will go a long way in ensuring he is remembered for generations to come.

The former Kiharu MP and 1992 presidential candidate also left an indelible mark in the hospitality and education sectors, Ngegi said.

He was an accomplished public servant, being the first indigenous African Permanent Secretary for Education in 1963.

A number of roads and streets within Nairobi have been named or renamed after prominent Kenyans.

This year, Kapiti Crescent Road in South B was renamed in honour of the football legend Joe Kadenge.

Post a comment
WATCH: The latest videos from the Star
by MAUREEN KINYANJUI News Reporter
Nairobi
31 March 2021 - 22:00
Read The E-Paper