Peponi Road to be closed for three months over construction 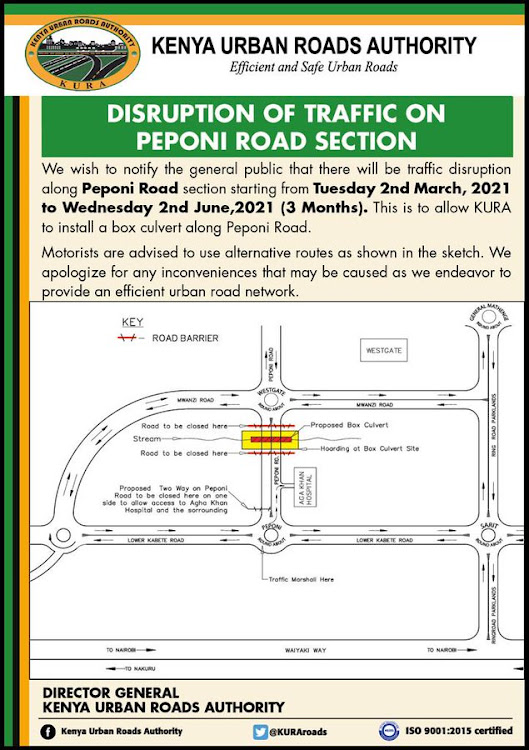 A key link road in Nairobi’s Westlands area will be closed for three months to allow Kenya Urban Roads Authority to complete construction.

Kura has directed motorists on Peponi Road to use alternative routes starting March 2 to June 2. The closure will enable the agency to install a box culvert on the road. The section has been a hazard to motorists due to flooding.

“We wish to notify the general public that there will be traffic disruption along Peponi Road… this is to allow Kura to install a box culvert along Peponi Road,” by the authority said in a notice on Tuesday.

Motorists were advised to use Lower Kabete Road and Mwanzi Road as a section of the two-way Peponi Road near the Aga Khan Hospital will only allow one-way traffic to access the hospital.

The agency said the alternative provided shall be sufficient for motorists as they should follow instructions provided by traffic marshals.

Major roads are under construction in the city, forcing the diversion of traffic flows. To address the confusion, traffic police have been deployed on the affected routes to redirect motorists.

For instance, more traffic personnel have been deployed on the Nairobi Expressway to help in ensuring a smooth flow of traffic. This is to also help hasten construction.

Two weeks ago, motorists using Waiyaki Way were warned of more disruption in the Kangemi area over the planned demolition of a major bridge.

The contractor of the Nairobi-Rironi highway plans to demolish the Kangemi bridge before reconstructing it to accommodate a new road design.

Those using the route will use a diversion on the Kangemi bridge, which will affect the regular flow of traffic.

“This is to notify you that a diversion has been done on the left-hand side of Kangemi bridge next to Total petrol station for a distance of about 100 metres to serve traffic headed towards the Nakuru side," a notice reads.

Traffic headed to Nairobi will be diverted to the existing left-hand side of the main carriageway, which will facilitate the demolition and subsequent reconstruction of the bridge.

The ongoing expansion of the busy highway is running concurrently with that of the Nairobi Expressway, which has caused major traffic disruption for motorists using the route.

The new highway, estimated to cost Sh59 billion, will be completed in three stages starting with phase one (6.5km) which runs from JKIA to Likoni Road and the Southern bypass interchange.