One of them, Shadrack Wambui, grew up in the slum and says this is a way of giving back to community.

• So far they have filed several cases on behalf of residents.

• They hope the NGO will also be a positive influence on the community. 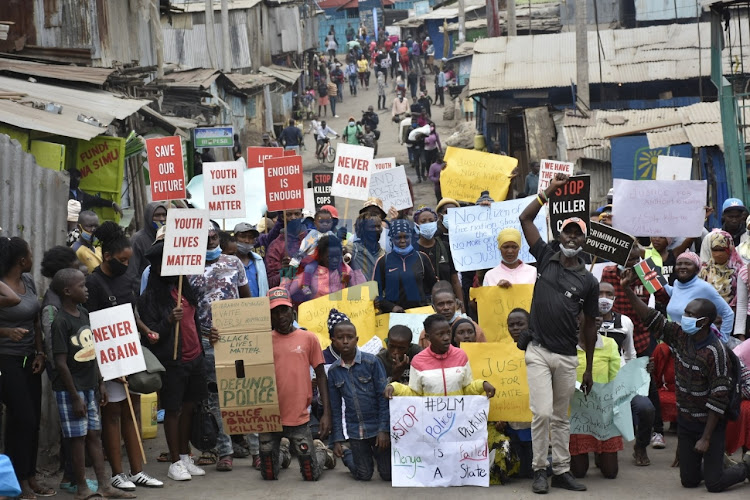 Protesters call for an end to police brutality during a march in Mathare on June 8, 2020.
Image: FILE

Access to justice for residents of informal settlements in Kenya has been a major challenge given the high cost of litigation.

In view of this, a group of young lawyers has registered an NGO that offers free legal services to Mathare residents. Under the name Sheria Mtaani, they opened their doors for residents in September.

Since then, their office has been a beehive of activity, filing several cases for their clients. The Star visited their office and witnessed first-hand how residents are already benefitting.

Sheria Mtaani has five directors—Shadrack Wambui, Samuel Chelongo, Dorcas Mwae, Wycliffe Omaiyo and Abel Asuma. Wambui, who was born and bred in Mathare, says they had the idea even before they were admitted as advocates of the High Court.

“It was majorly meant to assist members of the public, especially people from disadvantaged areas where I have grown up in the slums of Mathare,” he says.

An accomplished young lawyer, Wambui says they had the idea of helping residents to enjoy easy access to justice, especially because not many people can afford legal services.

Wambui says as someone who grew up in Mathare and managed to make a name for himself, he hopes the NGO will also be a positive influence on the community.

"Having grown up in that environment where we did not have anyone to look up to, I hope my friends and I will be a positive influence on the young boys and girls so they can also make it.”

Wambui hopes to inspire the youth in the slums “so that when they see us going there in suits, they will desire to be people like us or even better."

On why they set up shop in the slums, Wambui, who was admitted to the bar in 2018, says it is meant to give residents a sense of belonging as opposed to establishing it in the CBD or Upper Hill.

“Just by the mere fact that this organisation is in the middle of Mathare, there are some things that will be curbed or controlled,” he says.

Mathare is one of the slums with a high rate of extrajudicial killings. Several organisations, including human rights groups, have condemned the continued killing of young boys by the police. But the police deny wrongdoing.

Wambui believes Sheria Mtaani might help in reducing the killings as the police will know they are there to hold them to account.

"You could even call it a scarecrow; it will scare some of the problems that we were likely to face; it will prevent a policeman from taking a gun and shooting at someone because they know there is an organisation here meant to hold them to account,” he says.

In the long run, they intend to undertake strategic litigations of public interest—“issues that affect society and do not necessarily happen in our society but are likely to affect the way we live and mingle.”

“Majorly, Sheria Mtaani is about access to justice whether procedural or substantive, we are about helping people to understand their legal problems so they find their solutions,” Wambui says.

As the Star visits their office, Wambui and Chelongo are taking court papers to 65-year-old Eunice Muthoni, a client. Muthoni has a land dispute and Sheria Mtaani has filed a case for her. They proceed to her home to give her the papers and Wambui explains the directions given by court to her in Kikuyu.

Muthoni then tells the Star she is elated by the presence of the organisation as most residents are poor and cannot afford to file cases in court. She says their rights were violated but not any more.

“I am happy with the work Sheria Mtaani will do here and they have already filed a matter for me in court,” Muthoni says.

Walking through the slum, Wambui is stopped by many residents who just want to have a word with him. He is well known in this area.

On the way back to the office, we meet Priscilla Nahashon who sells groceries near Sheria Mtaani’s premises. Priscilla says before the NGO came to their rescue, it was hard for them to know how to get an advocate and generally access justice. But now they can walk to the office and get legal advice, she added.

“Before this initiative, most residents would close businesses and go to look for legal services without knowing where they should start from,” she says.

"We are glad that it is our son, one of our own, who has brought it here near us. That means we can approach him for any legal advice when in need.”

Youth coordinator Paul Njogu says the NGO will help him in his day-to-day activities. He says that as someone who deals with the youth daily, the NGO will go a long way in offering support and mentorship for young people who are deep in crime and other ills.

“Mostly, this organisation will give us legal advice on what to do if we have a case of any nature because people don’t know, considering people here fear the police too,” Njogu says.

On several occasions when some of the youths are arrested, Njogu has had to call Wambui to go and assist and so he says taking the NGO down to them is a plus.

This day, Njogu has been meeting with 36 teenagers who have reformed from petty crimes and want to be integrated back into society. He works closely with the local police officers who are also expected to attend and talk to the boys.

The meeting is held in a facility adjacent to Sheria Mtaani. Wambui and Chelongo also join the meeting and encourage the boys to quit crime. Wambui tells them that he also grew up in the area but has made a name for himself through hard work and so they too can do it.

One thing is clear, Sheria Mtaani may just be the ray of hope for young boys and girls. Despite the harsh life of the slum, they too can dare to dream of a better life. They are told to avoid bad company.

Asked how they balance private practice and running of the NGO, Chelongo says they have put up structures to ensure at least one lawyer is on the ground every day.

“Currently, we have structures that on Fridays, advocates in private practice like us spare our time from 9am to 3pm to go and attend to cases in Mathare,” Chelongo says.

This means from Monday to Thursday they engage in private practice through which they get funds to support the organisation. They have no donors.

Chelongo says they have a list of lawyers who volunteer to sit in from Monday to Thursday on a rotational basis, depending on how busy their diaries are.

Mwae, another director, says the major challenge is resource constraint given that they are still a fairly new organisation.

“We spent from our pockets to come up with the office from furnishing it and even employing an administrator to run it,” she says.

“Regardless of the challenges, we strive to continue helping people who really need our services.”

Another challenge is convincing some of their colleagues to accompany them to Mathare. Mwae says even though some of them are willing to help, they have reservations about visiting the place because of the things they have heard about it.

"But we continue to encourage them to be part of us as we give services to the people of Mathare," she says.

Asked how different their organisation is from the well-known Kituo cha Sheria, they say Sheria Mtaani operates at the grassroots.

Nadia Mohammed, a member of Sheria Mtaani, says Kituo cha Sheria is not easily accessible, unlike their NGO that is at the heart of Mathare.

So far, they have filed several matters in court, including a recent one on sexual offences where the accused have no legal representation.

“We want to reduce the number of people going to prison because there was lack of representation, which demonstrates why we have mounted the case in court,” Wambui says.

They also engage young people in sports. On December 4, they had a football match pitting lawyers against the local youth.

Wambui tells the Star that lawyer Danstan Omari is their patron and mentor and adds that his help has been crucial.

Omari describes Sheria Mtaani as a good initiative that will fill the legal representation gap and offer life-changing advice to residents.

“A local solution to a local problem is the only way to go forward because all other NGOs were foreign-funded. They did not understand the real issues affecting us,” he says.

He says whatever little money they make from practice and other small businesses is pumped into the NGO and they seek people of goodwill, especially lawyers, to support the organisation with their services.

"Wambui has grown up there and he has seen the type of injustices that the people are facing, thus the reason the NGO was set up in Mathare,” Omari says.

He expresses concern that service week events organised by the Judiciary are never taken to slums so residents can get legal advice.

“Under the LSK Act, every year there is a service week for lawyers to give free service which never goes to the slums. It’s majorly at the High Court stations and the law court stations; the people in the slums are not included,” he concludes.

Post a comment
WATCH: The latest videos from the Star
by ANNETTE WAMBULWA Court Reporter
Nairobi
24 December 2020 - 22:00
Read The E-Paper