•President says NMS tarmacking 400km of roads in the city. 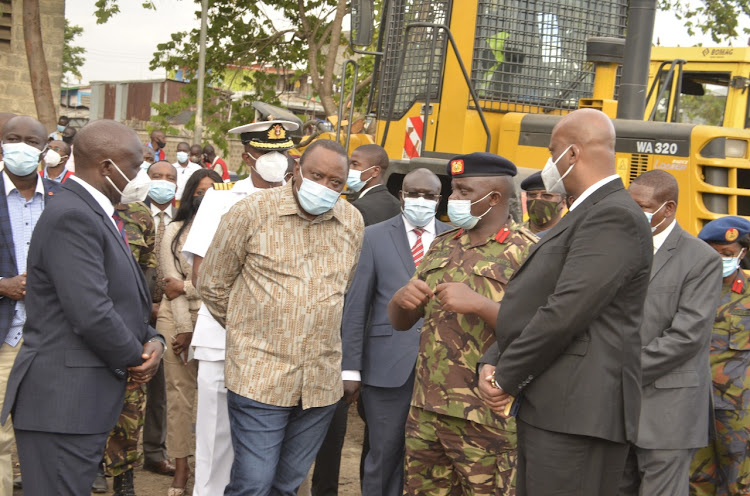 Uhuru said despite insults being thrown his way, Badi had remained steadfast and delivered on key development programmes within a short time.

He spoke at the Bomas of Kenya during the launch of the 'Kenya ni Mimi' youth dialogue in Nairobi.

Last month, Sonko took to his social media accounts where he referred to the President as 'Nairobi Super Governor’ and Badi as 'Saddam Hussein'.

But Uhuru ignored Sonko and instead enumerated the many projects NMS had initiated and was implementing.

He said the agency was in the process of tarmacking 400km of roads in the city.

With the set up of boreholes and water bowsers, people in the informal settlements can get access to clean water, Uhuru said.

“People in our informal settlements used to pay almost Sh40 daily to buy two jerrycans of water. That is a huge amount. But look at what is happening now, with the boreholes they get water regularly and free,” Uhuru said.

The remarks were a clear show of the President's indifferent attitude towards Sonko's impeachment by MCAs last Thursday.

The Senate will on Wednesday convene to look at the resolution of the county assembly and decide on how to handle the impeachment.

In February, the President hosted the MCAs at State House the weekend before a planned impeachment motion against Sonko. It is said Uhuru asked the ward representatives to drop the ouster bid.

However, sources said State House had okayed the governor's impeachment.

During the debate last Thursday, a source told the Star the President made a phone call to one of the Jubilee Party leaders in the assembly as he followed the proceedings.

Uhuru established NMS in March to handle four key functions that Sonko handed over to the national government.

“I'm humbly requesting you to support Badi because he is doing good work. Let us work together. If Nairobi improves, it will be for everybody,” Uhuru said.

During the launch of the Nairobi Commuter Rail last month, the President hailed Badi in his efforts to decongest the city's central business district.

“The Nairobi Metropolitan Service is a pilot project that has been successful in rolling back the frontiers of the urban indignity of poverty,” Uhuru said during his State of the Nation address in Parliament last month.