State to allocate Park Road affordable houses within a month

•As of December 4,   310,370 people had registered with the Boma Yangu platform , contributing Sh463 million towards the AHP. 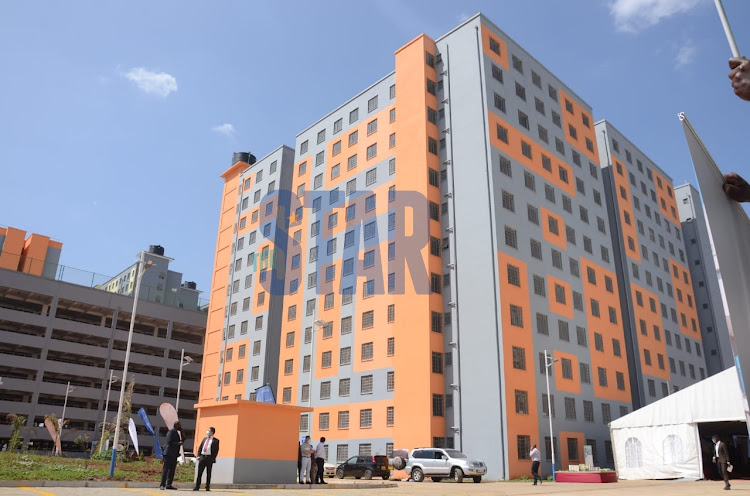 The government will spend one month allocating the 1,370 units at the Park Road Affordable Housing Programme in Ngara.

This will pave way for phase two of the project which will be located at Starehe, Shauri Moyo in Nairobi  and Athi River.

"The completion and sale of the Park Road housing units in record time, will pave way for ground-breaking and the launch of several other AHP projects, here in the city and also across the country," said housing PS  Charles Hinga on Friday.

While launching the allocation process at Park Road, Hinga described the event as one that paints a picture of hope for Kenya, as access to shelter is a basic need for every human.

"Indeed, by evidence of this project being completed, we are providing a pathway for Kenyans, from all walks of life including those in the informal sector, to own their homes," he said.

The PS however  stated that people had politicized the project.

Hinga noted that the housing sector in Kenya is broken but the government through projects like the AHP is correcting the wrongs.

"Our work is to ensure that all those who put in an application and are eligible will get what they deserve," he said.

On behalf of the financial contributors, KCB CEO Joshua Oigara pledged commitment in the project.

"We will stand with the government to make sure this project is a reality," he said.

Oigara commended the government, saying that amid a pandemic, it has managed to make an affordable housing project a reality.

KCB is among the seven local banks who have set aside funding to put towards affordable mortgages and other financing mechanisms for AHP.

The banks - Equity, Cooperative, Absa, KCB, Stanbic, NCBA and HF - have pledged Sh365 billion worth of mortgages for the affordable housing programme

Central Bank of Kenya governor Patrick Njoroge said the project was a symbol of bringing dignity to the 1,370 families who will become house owners.

He presented Sh185 million from the CBK staff who had applied for the house allocation.

Transport CS James Macharia highlighted that through the AHP, Kenya has joined other countries globally who had turned the challenge of providing affordable housing into an opportunity.

" We expect that our extensive pipelines of projects will not only avail decent homes to Kenyans but also create job opportunities and income generating activities through the integrated supply chains," he said.

Targeting the Small Medium Enterprises, the CS said the flagship of AHP will be in the income groups that would be working in the housing projects either as employees or suppliers.

Macharia assured Kenyans that the Government will implement all the awaiting pipeline projects which are awaiting funds.

His speech was read by Transport PS Chris Obure.

With regard to Park Road allocation, Hinga emphasized the state will remain committed to a transparent process.

The housing units will be allocated to qualified applicants through a comprehensive and fair process.

Applicants are expected to register on Boma Yangu online platform portal, be Kenyan citizens with proven ability to buy via a transparent and accountable manner.

Only people earning less than Sh150,000  can apply for the houses at Park road through the Boma Yangu Portal.

As of December 4,   310,370 people had registered with the Boma Yangu platform , contributing Sh463 million towards the AHP.

The criteria for the allocation of Park Road project units is 60 per cent civil servants and 40 per cent other citizens.

The prices of the houses range between Sh1.5 million and Sh4 million.

Homeowners will be expected to live in their houses and will not be allowed to sell before the lapse of eight years to avoid speculation on these units.