Sonko, Badi in nasty spat over control of county askaris

• City Hall accuses the NMS of forcefully taking away more than 1,000 askaris out of  1,801 from the Security and Compliance sector.

• But the NMS says the officers and the functions it controls are inseparable as some of the roles require enforcement. 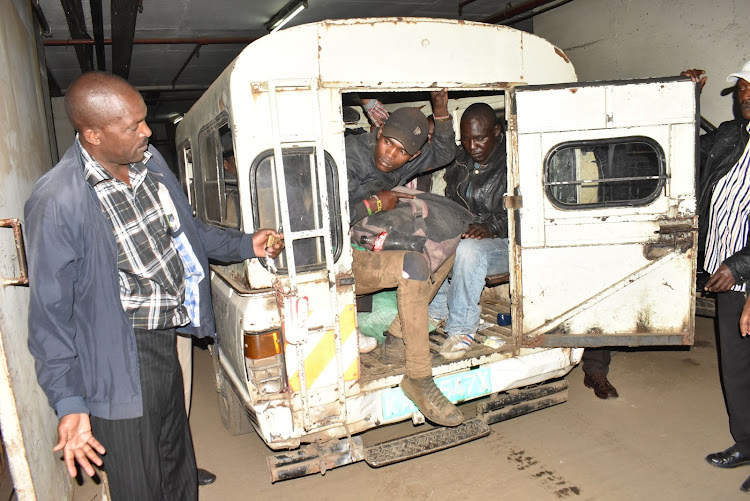 City Hall and the Nairobi Metropolitan Services are embroiled in a nasty battle over the control of the dreaded city askaris.

In what could further deteriorate the worsening relationship between Governor Mike Sonko and NMS boss Mohamed Badi, each of the two institutions claims the control of the Inspectorate department.

The Sonko team accuses the NMS of forcefully taking over more than 1,000 askaris from the Security and Compliance sector, arguing that the sector was not among the transferred functions in the deed of transfer.

Sonko signed away four key roles to the National Government on February 25 under the deed of transfer - health, planning and development and transport, public works, utilities and ancillary services.

But the NMS, which is domiciled in the Executive Office of the President, says the officers and the functions it controls are inseparable as some of the roles require enforcement and compliance.

In a series of documents seen by the Star, the two are engaged in horrid exchanges.

On October 13, Kathenge sent a protest note to the NMS director-general in which he complained of Maina's ‘detestable’ action of storming the personnel registry of the City Inspectorate on the same day and carting away about 2,000 personnel files.

“These are sensitive documents which touch on the employment details of the concerned officers and even if they are not sensitive, the action by the officer is not only obnoxious but subverts the Nairobi City County Government."

He implored Badi to impress on and persuade the officer from the alleged gross misconduct. He at the same time asked that the documents be returned.

On Thursday, Kathenge told the Star the NMS had forcefully taken 1,164 officers from the department without consulting the county government.

“They requested for names of all the staff in the county and then they picked the officers they wanted from the department. There was no secondment. Secondment must involve the Nairobi City County Public Service Board, which was never involved,” he said.

On October 26, 13 days after the Kathenge protest, Maina wrote to the Human Resource department at City Hall with the information that the NMS intended to undertake a headcount of all members of the directorate. She wanted the HR to facilitate the process.

Yesterday, Maina declined to comment on the push and pull over the control of the department and instead referred the Star to the Human Resource department.

“In issues of human resource and inspectorate, we have a director of HR, who is mandated to address those issues. NMS is a National Government agency, so we have a provision where the director of HR addresses issues raised concerning HR,” she said.

The Star could not reach NMS HR director for comment.

Leleruk had, in an internal memo on July 20 to the county director of Governance and Compliance, revoked the deployment of Inspectorate officers by City Hall to subcounties.

He said the revocation was done after consultations with NMS director general and deputy director-general.

According to Nairobi County Inspectorate Service Act, the Inspectorate is a department within the county public service.

It consists of an inspection unit, a fire and emergency service unit and disaster and rescue services unit, traffic unit and other units as the board of the assembly may prescribe.

The inspectorate officers have powers of arrest without warrant and seizure of items.  These and other powers make them a dreaded lot in the city.

While the deed of transfer does state the transfer of Inspectorate department, most, if not all the functions taken over, require enforcement and compliance officers.

In another letter to the human resources director dated October 26, Maina cautioned seven officers who were performing NMS roles without being seconded.

The following day, Leleruk protested to City Hall’s HRM against the order to 23 officers to take compulsory leave.

On November 3, Leleruk, insisted on the revocation of the deployment of the officers, saying the management and operations of uniformed officers the world over is done by the highest-ranking officer in the command.

“This is therefore to request your office to recede the recent deployment, which erroneously deployed compliance officers to enforcement to be operational commanders as we wait for feedback from NMS heads of directorate to provide their priority areas requiring enforcement officers,” the letter states.