It will spare travellers the anger and frustration associated with matatus

• Travellers will ferried to and from the Nairobi Central Station under the Commuter Rail Project, which is a collaboration of KR and NMS.

• Passengers will save both time and money and at the same time enjoy much-needed comfort on their way to and from the city centre. 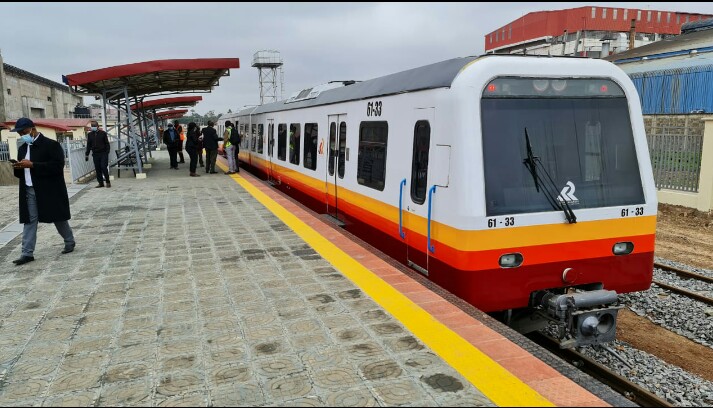 Commuters in Nairobi will soon be spared anger and frustration associated with matatus after the much-anticipated Nairobi Commuter Rail Service is launched.

The launch, in a few weeks' time, is set to provide new dawn in public transportation in the capital.

Travellers will be ferried to and from the Nairobi Central Station under the Commuter Rail Project, a collaboration of the Kenya Railway Service and the Nairobi Metropolitan Services.

The project will be a game-changer in the reduction of both vehicular and human traffic jams in the city.

Passengers will save both time and money and at the same time enjoy much-needed comfort on their way to and from the city centre.

Commuters tell sad stories of their experiences in matatus. They are verbally and physically abused, robbed of money and personal items and even hijacked. Violence is meted on women, with some sexually harassed and raped.

The commuter rail is part of the Master Plan of an integrated commuter system within the city and its environs. It also comprises the Bus Rapid Transit, monorail and underground rail.

Some of the infrastructures and amenities are still under installation. Recently, KR  imported high capacity Diesel Mobile Units.

Operations have started in Embakasi, Pipeline and Doonholm railway. The three railway stations are among the 10 stations the KR is upgrading and constructing.

The others are at Umoja, Kibera, Thika, Mbagathi Way, Kenyatta and Strathmore universities, Kitengela and Thogoto.

Park and ride services will be available at the designated stops. The motorists will park at the stations and board the City Rail System buses to and from the city.

President Uhuru Kenyatta is expected to launch the termini next month, NMS director-general Mohamed Badi said when he recently appeared before the National Assembly’s Committee on Administration and National Security.

The city’s commuter rail service was introduced in May 1992 in response to a series of strikes by PSVs. With time, the demand plummeted due to poor management.

KR is targeting a daily commute to the CBD of 1.5 million people.

Matatus will be barred from the city centre next month, according to the NMS city decongestion plans announced in September.

Matatus using Jogoo Road and Haile Selassie Avenue will terminate their journeys at Muthurwa and those using Mombasa and Lang'ata roads at the Railway Golf Club.

Those plying Thika Superhighway will terminate their journey at the newly completed Ngara and Parklands termini.

Also, an expressway will be set up running from the Kenya Planters Cooperative Union near the Wakulima Market all the way to Jogoo Road.

The NMS is also searching for other grounds to be used as bus termini outside the CBD.

When the NMS was established and handed over to Badi on March 18, the President called for the operationalisation of two matatu termini at Desai Road and Park Road.

The Badi-headed NMS has also come up with the Non-Motorised Transport Corridors from some estates to the CBD.

This gives city residents the options for walking and cycling safely. Phase One of the NMT runs parallel to Nairobi River from Doonholm to Westlands.

Phase Two will run from the city centre to Lang'ata along the railway while Phase Three will start from the CBD to Roysambu through Ngara.

In June, President Kenyatta inspected the NMT along Kenyatta Avenue and Wabera Street.

NMS engineer Michael Ochieng said at the time that the intention of NMT was the decongestion of the CBD.

“This NMT network runs from Kenyatta Avenue to the Integrity Centre through Serena Hotel. Another will be along Moi Avenue to join yet another one from City Hall to University Way roundabout,” he said at the time.