• The project will serve as a functional, architectural and urban centrepiece to Nairobi’s growing global reputation as a modern city.

• The site is surrounded by the Industrial Area, the CBD and dilapidated and ready for redevelopment residential houses. 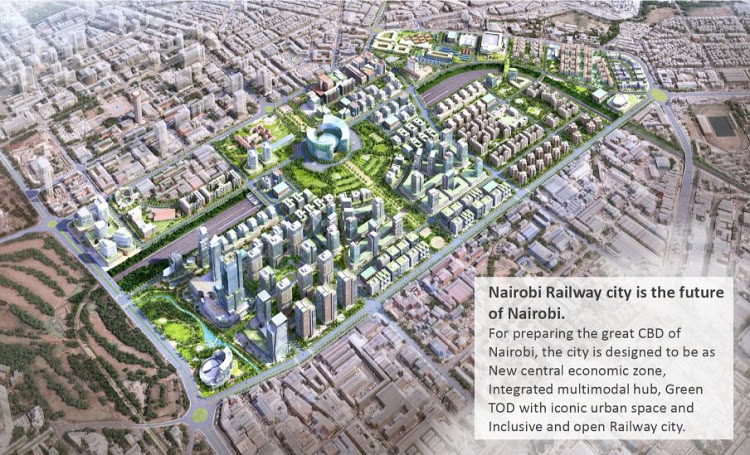 The government has invited tenders for the development of the much-awaited Nairobi Railway City project intended to expand the Central Business District.

The Sh27.91 billion project will be implemented in phases over 20 years with the first phase due for development between 2020 and 2030.

The bulk of the funding will go to the railway infrastructure and water supply at Sh17.5 billion and Sh3.9 billion respectively.

All bids, from interested and eligible candidates, must be received on or before August 20, the State Department for Housing and Urban Development said in the advertisement in some media outlets on Wednesday.

The full details can be downloaded from ministry's website: www.housingandurban.go.ke.

The multi-modal urban development undertaking between Haile Sellasie Avenue and Bunyala Road in the area adjacent to Uhuru Highway will be on 425 acres, 292 of them owned by the Kenya Railways and currently serving as the Nairobi Railway Station.

It is part of the Nairobi Integrated Urban Development Plan.

In the tender invite, the State Department for Housing and Urban Development says the government is committed to engage strategic partners in the development of the Railway City and related amenities as the master developer.

The project is a collaboration of the Railway City Development Authority, Kenya Railways and Nairobi Metropolitan Services.

The master plan says the Nairobi Central Railway Station and its surrounding areas will be "redeveloped into a multi-modal, transit-oriented, urban development.

“Owing to its strategic location, the Nairobi Station area will be developed into an iconic nerve centre for the Nairobi multi-modal transport system with a world-class new central station incorporating mixed use commercial developments, housing and intermodal facilities.”

According to the ministry, the project will serve as functional, architectural and urban centrepiece to Nairobi’s growing global reputation as a leading modern city on the world stage.

"The project is of great national significance as it forms part of core strategy for regeneration of Nairobi. The area has been designated as Special Planning Area."

It is intended to promote and enhance the global competitiveness of Nairobi.

Under the plan, Wakulima Market will turned into a park while KPCU, Africa's largest coffee mill, will be rehabilitated into a Kenyan Coffee Centre.

A new railway station will be built to allow the integration of Bus Rapid Transit (BRT) and other public transport modes.

The Technical University of Kenya will be turned into a Techno Research and Development Institute while the area towards Bunyala Road will be dedicated to meetings, incentives, conferences and exhibitions facilities.

A residential area of 28,000 people with a school and a small park will be built towards Landimawe and Industrial Area.

The new 'city' will also have a police station, fire station and a disaster response centre.

There will also be an underground tank to collect rainwater for supply in the proposed development.

The project also aims at impacting the connectivity to surrounding urban centres as well as being critical for Kenya’s efforts in a post Covid-19 recovery period.

The Nairobi Railway City will be the largest and most ambitious development to be undertaken in the metropolitan region since independence and is expected to attract local and international private capital.

Project will transform Nairobi into a sustainable, integrated, iconic and inclusive city
News
2 years ago
Post a comment
WATCH: The latest videos from the Star
by GILBERT KOECH News Reporter
Nairobi
22 July 2020 - 21:34
Read The E-Paper