19,800 units will be in Mukuru and Soweto under the Kenya Slum Upgrading Programme

• Mukuru and Soweto residents live in congested tin and iron corrugated structures, which health experts say are ideal for the spread of Covid-19.

• Low wages, insecure employment, limited education opportunities and poor sanitation are some of the challenges of slum communities. 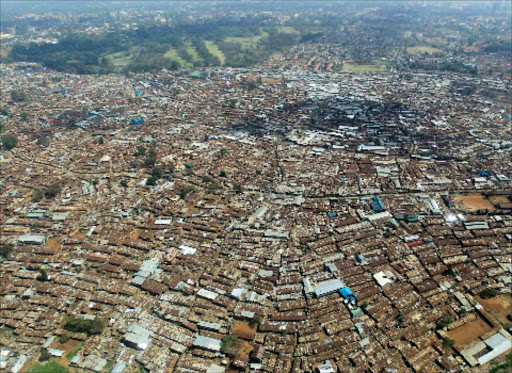 AERIAL VIEW: A section of Kibera slums from the air.
Image: FILE

Soweto and Mukuru slums will be upgraded into decent homes in the drive by the government to build 500,000 affordable houses by 2022, according to Housing Principal Secretary Charles Hinga.

Some 15,000 units will be built in Mukuru under the Kenya Slum Upgrading Programme (KENSUP) from the first quarter of this financial year.

"I already have Sh2.3 billion in my bank account for horizontal infrastructure. We will also be putting up schools, hospitals in Mukuru,” Hinga said via weblink on Tuesday.

He said Sh7.8 billion will be spent on the construction of 4,800 units in Soweto.

“People have vacated the site… there was no noise as they were well engaged. The contractor has been appointed and we are finalising the contracts,” the PS said.

Mukuru and Soweto residents live in congested tin and iron corrugated structures, which health experts say are ideal for the spread of Covid-19.

Low wages, insecure employment, limited education opportunities and poor sanitation are some of the challenges of slum communities.

A network of unscrupulous people lights houses (at a cost) through dangerously connected electricity wires and cables.

Hinga said investors have put money into the project for the informal settlements to get decent houses, citing Korogocho and Mathare as localities already turned into special planning zones.

Two months ago, the Nairobi Metropolitan Services suspended for two years all development plans in four Kibera informal settlements, saying it was a special planning area.

The notice was issued pursuant to the Deed of Transfer of functions from the Nairobi City County Government to the National Government published vide Gazette Notice No. 1609 of February 25, 2020.

“In exercise of powers conferred by section 52 (1) of the Physical and Land Use Planning Act, 2019 the Nairobi City County Government declares the informal settlements of Sarangombe, Lindi, Makina and Laini Saba all within Kibera Constituency within Nairobi City County as a special planning area.”

Ayany and Olympic estates in Sarangombe are excluded in the development plan.

According to NMS, the declaration will facilitate the formulation of harmonised standards and guidelines for buildings and other forms of development as defined under the Physical and Land Use Planning Act, 2019.

Hinga said there are 1,409 informal settlements in the country. About 900 of them are covered by the Kazi Mtaani programme under which 300,000 youths are employed to give them a facelift.

The initiative has been allocated Sh10 billion and will run for six months in all the 47 counties.

Hinga said the houses will be climate-friendly. Green buildings will help to directly meet 80 per cent of Sustainable Development Goals.

The minimum standard, according to the PS, is 20 per cent less energy, less water and less embodied energy in materials.