No social distancing, no face masks as coronavirus wreaks havoc in nearby Eastleigh

• The residents are bitter with the government for making them destitute at a time it is insisting on social distancing in  the war against the spread of coronavirus.

• Senators Kilonzo and Sakaja condemned the demolitions and maintained that the government had committed an international crime against the evictees. 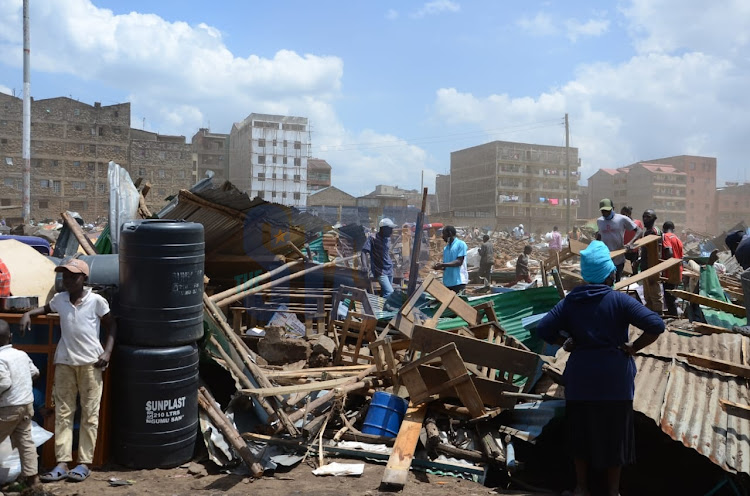 THE AFTERMATH: Dessperate Kariobangi North residents ponder their next move after their homes were demolished on Monday.
Image: DOUGLAS OKIDDY

Three days after a Kariobangi North estate was demolished, close to 5,000 former residents are still spending the nights huddled together in the cold.

The homeless residents are bitter with the government for making them destitute at a time the Ministry of Health is insisting on social distancing in the war against  the spread of coronavirus.

Nearby Eastleigh is now a Covid-19 hotspot with 63 positive cases as at Tuesday.

City Hall flattened the homes the the residents have lived in for 12 years to repossess the grabbed Dandora Estate Waste Sewerage Plant land.

Desperate Ahmed Hashim on Wednesday accused the authorities of dispossessing them of the land they had sold to them.

“The government should look at this issue. We struggled to build our homes and it is really hurting to see our children staying in the cold. We have no capacity to build new homes,” he said.

“As the ward rep, there isn’t much I can do. What hurts the most is that the government ignored court orders and decided that the people who elected it should stay in the cold," he said.

The government should have considered the health of residents before demolishing their homes at a time of rains and coronavirus threat, Maina said.

He announced that Governor Mike Sonko would provide food for 500 people.

“We shall organise how the food will be distributed. The vulnerable, including the elderly, the sick and physically challenged will be given priority. Expectant women and young children will also be considered,” the MCA said. 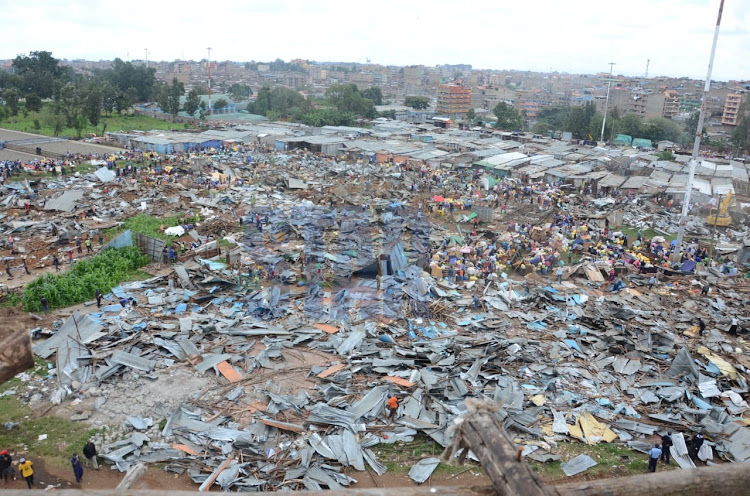 Kilonzo said the government had committed an international crime and violated rights of the evictees.

“What is happening in Nairobi in the middle of a pandemic is a violation of human rights.  Those people are out in the cold, mingling with others who they are not sure are infected," he said.

“God needs to find something about this government. There is something wrong on how it treats human beings,” he added.

Sakaja said the demolitions were inhuman, ill-advised and executed at the wrong time.

“ It is sad that despite a court order stopping the demolitions until the case is heard and determined government agencies went ahead with impunity and carried out the exercise,” he said.

The senator said it was incomprehensible that a government could render thousands of people homeless at a time the country is facing a pandemic and urging people to stay home.

He demanded an explanation from the chairperson of Standing Committee on Lands, Environment and Natural Resources.

The committee chaired by Nyandarua Senator Mwangi Githomi is expected to give a detailed report on the circumstances that led to the demolitions.

The report should include all the land in Nairobi officially mapped out as public land and road reserves.

It should outline the mechanisms in place to ensure that residents' rights are not infringed upon during demolitions and repossessions.

The committee is also expected to give the status of legal action taken to prosecute government officials involved in the illegal allocation of public land and road reserves.

Sakaja further wants to know how the government will compensate the affected families for loss of properties and homes.

He said that much as leaders support repossession of all grabbed public land, the exercise should done humanely.

“Those affected by these demolitions are the most vulnerable in our society and they deserve protection from the government,” the senator said.

Residents woke up to demolitions.
News
2 years ago
Post a comment
WATCH: The latest videos from the Star
by MAUREEN KINYANJUI News Reporter
Nairobi
06 May 2020 - 23:00
Read The E-Paper