5,000 evicted in Kariobangi even as Covid -19 cases rise in city

The Nairobi water company said it was reclaiming its grabbed land

• The demolition squad was sent by the Nairobi City Water and Sewerage Company  to reclaim its grabbed land.

• The elderly, mothers and children will spend the nights in the cold, exposed to the vagaries of weather and the coronavirus. 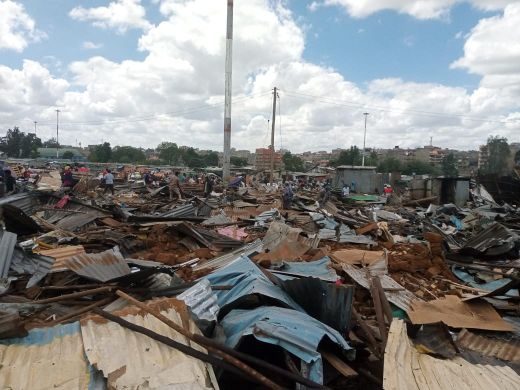 Residents of Kariobangi North on Monday woke up to the sound of rumbling bulldozers flattening structures, leaving over 5,000 people shelterless.

The demolition squad was sent by the Nairobi Water and Sewerage Company to reclaim its land.

The elderly, mothers and children will henceforth spend the nights in the cold, exposed to the vagaries of weather and the coronavirus - they cannot keep a distance.

The three bulldozers had been parked in the estate on Sunday evening.

Titus Ndambuki told the Star they have lived on the "reclaimed" land since 2008 and had never been given quit notices.

The water company said those evicted were residing on its land, which had been grabbed.

Ndambuki said a baraza was convened on Friday during which the DC told them to start looking for alternative places to live as they would be evicted.

"We never imagined that the government can leave its people homeless during these tough Covid- 19 times,” he said.

Ndambuki claimed most of the affected residents have land allotment letters and were waiting for title deeds to be processed.

“We have the letters and we have been paying rent for the past 12 years. How can the government claim that we are here illegally?" he complained.

Maryann Achieng’,  a mother of three, intends to move into one of the kiosks closed on the directive of the Ministry of Health in the fight against the spread of coronavirus.

She says she has no relatives in Nairobi and cannot go to her rural area due to cessation of movement into and out of Nairobi Metropolitan Area.

Achieng’ ekes out a living by hawking second-hand clothes in the central business district. But she has hardly been making money as she complies with government anti-mingling measures to avoid the spread of Covid-19.

“I will have to seek shelter in any structure with a roof because I cannot afford to move into a new house at this time,” she said.

The eviction could have not come at a worse time for Halima Abdi who, as a committed Muslim, must observe Ramadhan.

Halima condemned the eviction, arguing that they should have been spared as the government deals with life-threatening issues like the coronavirus pandemic.

"The country is a mess. Your children are arrested or killed. Our businesses have collapsed and the virus is spreading among us.  Where will we turn to if our own government is swallowing us?" she asked.

Area MCA Julius Maina Njoka also condemned the demolitions. He accused the government of treating the citizens inhumanely in the battle against the coronavirus.

According to Maina, this is the wrong time to carry out evictions and demolitions as people are facing a Covid-19-associated economic crisis.

“This is inhuman. How can the government leave people homeless in such a time? As the world is battling the coronavirus, our government is sending people to the streets. This is not the time to demolish houses," the ward rep said.

He feared for Nairobi shanty dwellers given that the city is already a Covid-19 hotspot.

“Most of these people are elderly and others with young families. With the curfew directive and schools closed, chances are that the virus will spread like wild fire,” Maina said.