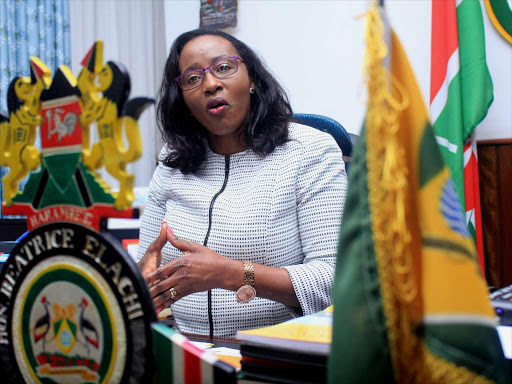 In the middle of the push and pull for county funds, the divided Jubilee side of the Nairobi county assembly got new leadership on Thursday as announced by party secretary general Raphael Tuju.

This, however, was bound to happen as internal wrangles had become common among Jubilee MCAs since the return of Speaker Beatrice Elachi in October 2019.

Her return saw the MCAs divided with the pro- Elachi team joining hands with the ODM MCAs while the others remained on the other side, effectively splitting Jubilee into two camps.

However, the Star has established that the recent change of leadership was decided upon after two meetings held by Tuju and party vice chairman David Murathe.

A top politician in Nairobi who sought anonymity said that President Uhuru Kenyatta had been concerned about the party leadership since last year and was being briefed on the intended changes.

“There have been numerous meetings both formal and informal as there has been intense lobbying from both the ousted and interim leadership,” the politician said.

“But the final meeting was held on Thursday and Murathe was present being the centre of consultation. Not forgetting the President as the party leader played a big role and gave the final decision," he added.

In a list seen by the Star, 53 Jubilee MCAs out of 65 appended their signatures in support of the removal the ousted leadership.

However, Speaker Beatrice Elachi said she is yet to receive any communication on the changes of the leadership.

She said the party knows the procedure of communicating such matters since she only knows of a letter circulating on social media of the Majority Whip change, but the office of the speaker has no such letter.

Governor Mike Sonko has been at the centre of the assembly chaos that took place for almost a month  between October and November last year.

It was his fall out with Guyo that led him to write a letter to Tuju requesting for his removal as the Majority Leader.

Sonko was also part of Elachi’s comeback in the assembly which he knew would be the end of Guyo as the two have not seen eye to eye since the House impeached Elachi in September 2018 but was reinstated by the court.

The fracas that was witnessed in the assembly for almost a month, led to a temporary change in the Jubilee house leadership

As a result, the former leadership was temporarily replaced by Tuju in an attempt to cool temperatures at the assembly.

However, things fell apart after the former leadership joined hands with ODM MCAs on the impeachment of Governor Sonko.

“At this juncture, it was clearly seen that the former Jubilee leadership was in bed with NASA to impeach Sonko. But when the President intervened, this paved way for Sonko to also look for a strong leadership that will act independently,” the source said.

The ousted leadership has now claimed that their removal was due to their pledge to support Nairobi Metropolitan Service Director General Mohammed Badi.

June Ndegwa who was the Majority Whip on Friday said that the decision by the leadership to work with Badi brought displeasure and not many people, including the governor, were happy.

She said that the differences between them and the new leadership had not yet been concluded and that Tuju was aware.

“The consultations were still going on. To them if they have calmed the situation, they have even made it worse. On our side we were not informed that they had arrived to a decision,” Ndegwa explained.

She added that she has not received any communication from the party on the changes.

On his side, former Majority leader Charles Thuo said that the differences between the supplementary budget and the Governor might also have been linked to their removal.

“We have no apology for supporting NMS and we know the differences in the budget making process might have led to our removal. It might be that the party is punishing us and using it as a warning to the people who support NMS,” he said.

Just like Ndegwa, Thuo said they were not consulted when the party arrived at the decision to change the leadership.

Sonko had until Wednesday to assent to the bill.
Counties
1 year ago

Giving the stand of the party, Tuju said the new leadership comprises both members from both camps of the party.

Confirming that consultations have been going on, he said the lineup was the best solution to end the internal wrangles.

“Last year I had put a temporary leadership which was best at that moment because the tussles among them was getting out of hand. But now we have given each part of the camp a position in the leadership,” Tuju said

Adding to that, Tuju said he had received complaints that Speaker Elachi was leaning more to the ODM side than Jubilee side.

“As a party we still stand by our word that we support the speaker and that is final. We know issues must be there in a party and that is why we made sure that both camps of Jubilee MCAs got a position in the leadership to end the in fights, “he said.

ODM MCAs have closed all the gates barring access in and out of the assembly.
News
2 years ago
by MAUREEN KINYANJUI News Reporter
Nairobi
19 April 2020 - 11:15