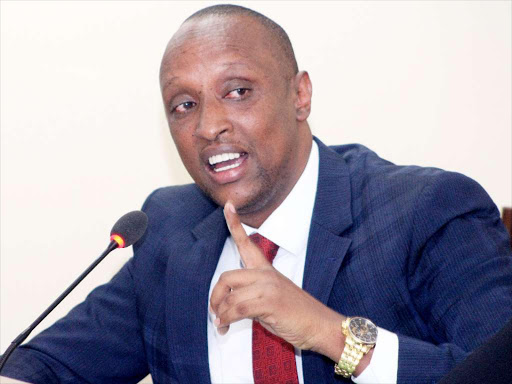 Power battles have rocked the Nairobi County Assembly after Jubilee MCAs sought the removal of Majority leader Abdi Guyo, his deputy James Kariba and the party’s two whips in the house.

On Thursday, a letter from Speaker Beatrice Elachi to the party indicated a resolution had been reached by Jubilee MCAs in a meeting held in Mombasa to ring changes to the leadership in the assembly.

The changes were sought by Governor Mike Sonko in efforts to have a good working relationship with the assembly, the letter says.

“Reference is made to a letter dated October 4, from Mike Mbuvi Sonko, the Governor of Nairobi City County in which he sought a change of leadership of Jubilee Party in the County Assembly,” the letter reads.

Nominated MCA June Ndegwa communicated the agreed changes to the speaker after the Mombasa meeting.

Guyo is to be replaced by Dandora 3 MCA Charles Thuo, Kariba (Riruta) to have his position taken by Ziwani’s Millicent Wambui.

Chief Whip Chege Waithera (South B) is to be replaced June Ndegwa who will be deputised by California’s Hassan Abdikadir.

Elachi said the changes will help the county government work in liaison with the assembly to achieve President Uhuru Kenyatta's Big Four agenda.

The proposed changes have been opposed by the MCAs who said the move is unconstitutional.

Guyo said that there was no law used to explain the move because the meeting was convened against the party constitution.

Standing Orders gives the Majority Whip the power to call for a party meeting only after a member has given notification of such an agenda on the removal of the majority leader.

Minutes must be taken with a list of party members present. "The other way is using Article 19 of the Jubilee constitution that allows the secretary-general to call a caucus of the members for the same. None of the two ways has been followed," Guyo said.

The Matopeni MCA said he was ready to relinquish his position if proper elections were called and he loses. "But they know I will still win if such an election is called. That is why they are using these kangaroo things," Guyo said.

Waithera Chege said the purported changes have not been endorsed by all Jubilee MCAs and that the speaker failed to follow the law in overseeing the process.

"What we are asking is who called the meeting?," Chege said.

Last Sunday, Sonko hosted both Jubilee and ODM ward representatives at a hotel in Mombasa. Guyo said the purported signatures are those of members who were registering at the hotel.

“They wanted to use the Mombasa meeting list but did not because Jubilee members who were there were less than 20. So this week, the governor called members at his Upper Hill office to append signatures. This means they did not have signatures in the first place,” Guyo said.

There has been no official communication from the party's secretary-general Raphael Tuju. But Thuo said the changes were effective Thursday and that he was only waiting for Guyo to hand over to him.

“I'm waiting for the official handover from Guyo so that we start working," Thuo said. Guyo was last month replaced Hamza MCA Mark Ndung'u in the assembly's service board in a move communicated by Sonko.

The decision has since been challenged in court by clerk Jacob Ngwele.