CHILDREN OF A LESSER GOD

'Some of us are learned, but we have been unable to get jobs' 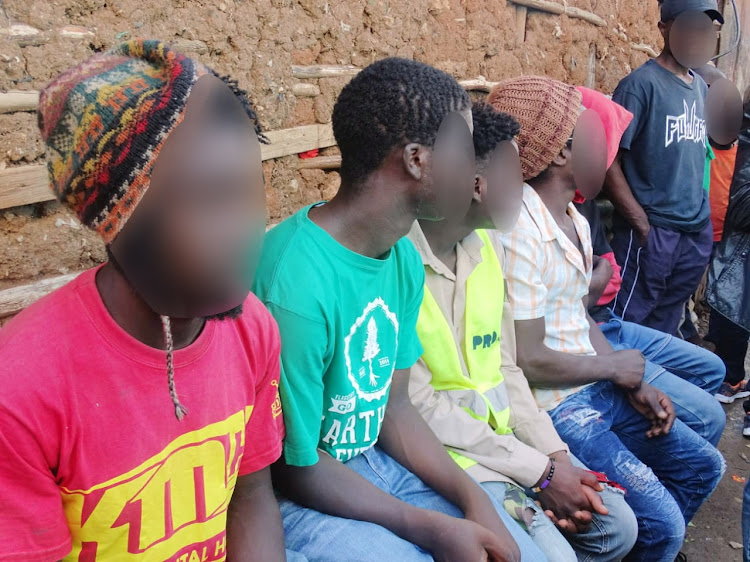 HELPLESS: Some of the youths who spoke to the Star about what it means being poor and living in Kibera.
Image: NICHOLAS MAVINDI

Helplessness and desperation define many a Kibera youth. The youths say the society looks down on them and dismisses them as useless.

Politicians use them during campaigns and elections and immediately turn their backs against them thereafter. They supply them with drugs and alcohol to do their bidding.

The jobs promised are never forthcoming. The abandoned youths then seek solace in drugs and alcohol. They are, henceforth, treated as dangerous and a threat to society.

“People mistake us. Some of us are learned, but we have been unable to get jobs. The economy is tough and it does not favour the poor. We suffer a lot, and for someone to forget the stress, we turn to drugs," one of them who chose not to be named told the Star.

Youths who spoke to the Star said they also have families to take care of. They depend on menial jobs in slums and betting.

Others join criminal gangs to make ends meet. “We look for all means for survival including stealing. Our families need to eat; we need to pay rent and our children need to go to school," one of them told the Star.

A number of them are killed. Police are their enemies. They live in fear of being killed or arrested. They go into hiding and get exposed to all type of drugs. The hideouts are their safe havens.

“We receive many cases from youths and to tell you the truth, being a youth in the streets is a crime. Youths are not treated equally. They are easily victimised,” Haki Africa executive director Hussein Khalid told the Star.

Human rights lobbyists report the complaints to the police and IPOA but few cases are followed and conclusively dealt with. Only five per cent of cases is attended to.

“Drugs are things that are used secretly and we are trying to find out who supplies the youths. It's difficult to know how this happens because people fear to report it to us,” Nehemia Mocha, an assistant chief in Kibera told the Star.

There is a glimmer of hope, however. Some of Kibera youths led by ”Desmond“ have formed Kibera Mental Health to help drug addicts.  The group preoccupies the addicts with activities like football and any cleaning up slum villages.

Members have contributed money to buy plastic tanks for storing clean water from where residents easily access the commodity.

A survey by the National Authority for the Campaign Against Alcohol and Drug Abuse shows that bhang is the most widely used drug in Kenya among those aged 15–65 years.

Revealed: New drugs youth use to get high at parties

Some of the drugs can be made from readily available medicine at any pharmacy.
News
3 years ago

Tobacco, prescription drugs, bhang and alcohol are the most abused drugs among pupils.
News
3 years ago
Post a comment
WATCH: The latest videos from the Star
by NICHOLAS MAVINDI
Nairobi
08 August 2019 - 00:00
Read The E-Paper