Nairobi River clean-up stalls due to lack of funds

The Nairobi River was clean and abounded with fish, water beetles, dragon flies and other creatures a few decades ago

• The ministry had specifically sought an allocation of Sh110 million for Nairobi River restoration.

• The parliamentary Environment committee has reduced to zero the funding for environment projects. 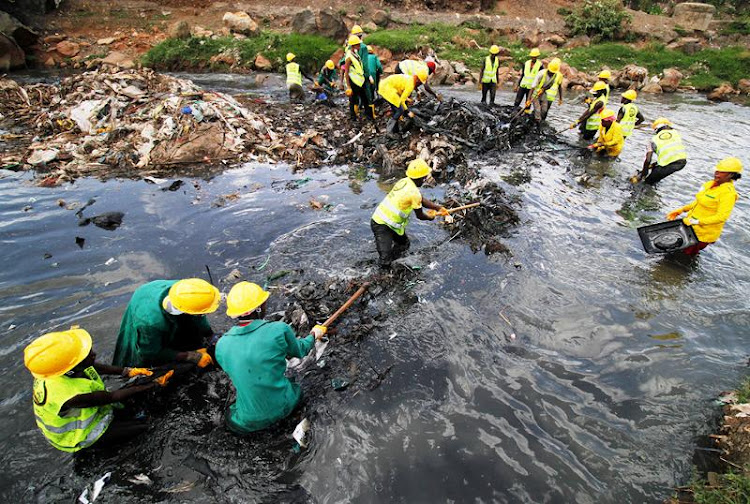 Youth hired to clean up Nairobi River hard at work in Dandora section in the ongoing efforts to reclaim the river on May 15, 2019.
Image: JACK OWUOR

The much-hyped Nairobi River clean-up has stalled for lack of funds, the Star has learnt.

A source at the Ministry of Environment said their budget had been reduced. "We might not perform any of the activities due to budget cuts," the source said.

The Nairobi River was clean and sparkling a few decades ago. It abounded with fish, water beetles, dragon flies and other creatures.

Today, it is technically dead. It no longer supports life, except for insects that feed on dirt.

Cleaning the river is an enormous problem. Hordes of workers have been deployed along the river to clean it but their efforts have borne no results.

Now, with budget cuts, the situation is unlikely to improve.

The ministry had this financial year requested the National Treasury to provide Sh284 million for urban rivers restoration, but the parliamentary Environment committee chaired by Kareke Mbiuki declined.

The ministry had specifically sought an allocation of Sh110 million for Nairobi River restoration, Sh140 million for Imarisha Naivasha and Sh70 million for Suswa/Lake Magadi. None of them will get the money.

Part of the money was paid to casual labourers who have been cleaning Nairobi River.

In April, the assembly passed another supplementary budget in which it also allocated funds for the casual workers under the environment docket.

Funds for climate change directorate activities were sliced by Sh100 million while those for the Kenya Forest Service plantation programme was reduced by Sh200 million.

Wahungu said the sewer lines were built when the city population was less than a million. The population is now about four million, many of them informal settlements dwellers.

“People in these informal settlements are sitting on sewer line way leaves,” he said.