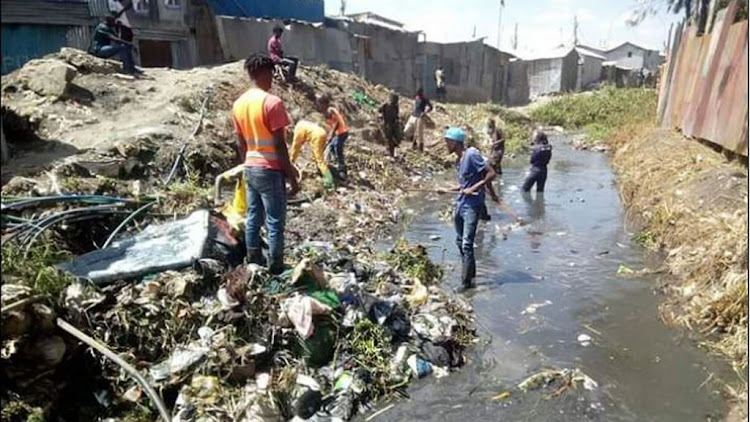 A group of Nairobi slum youths have shunned crime and complaining and taken it upon themselves to make their dwellings clean and livable.

Amusha Youth Group, which was formed in March, started the initiative to clean up River Ngong which passes right through the Mukuru Kwa Njenga slums.

The settlements contain more than  600,000 people living in makeshift structures of cardboard and plastic. Families who are 'better off' use corrugated iron.

The mostly single-room houses have poor or sanitation and hardly any running water. The area has no garbage collection, so most waste, dirty water and garbage go directly into the filthy, contaminated river.

It's worse during the rainy season when the river floods occasionally.  The water and foul smell attract flies and mosquitoes.

Embakasi Girls Secondary students have to be sent home as water floods the school.

These perennial problems prompted the youth to swing into action.

Amusha chairman Haname Daudi told the Star the project was started to ensure the girls were not sent home every time it rained.

“During the rainy season, It's very sad to watch our daughters and sisters often sent home from school so the so that the sewage can be cleaned up."

"We experience outbreaks of diseases because the river acts as a dumping site for everything.”

The project has also helped reduce crime as the youth are gainfully occupied.

Lack of tools and protective gear, such as boots and gloves, has slowed down their work.

The group is appealing to Nairobi county government to give hem equipment to speed up their work and avert a health crisis when it rains.

They say it will also reduce crime.

“We have only one fork jembe and three rakes which are clearly not enough. We appeal to the county to add at least 10 fork jembes and rakes and also provide more protective gear,” Daudi said.

The group wants the county to compel building owner to remove sewage pipes placed near the river.

They want the county to identify a place where they can properly dispose of garbage and contaminated water.

The group has identified an area in Mukuru slum it wants to develop into a park and plant trees and flowers.

"This is not possible without the partnership and support from the county government, to help acquire soil and flowers," he said.