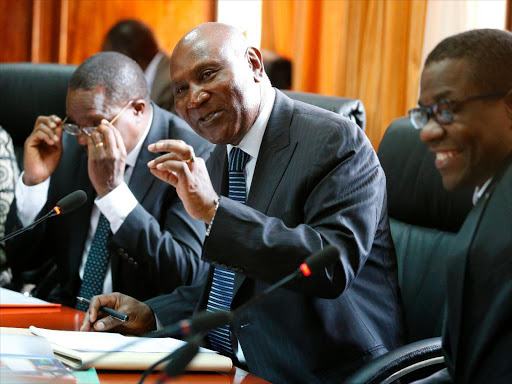 Public land set aside for transport, sewage, water, power and communication lines have been grabbed.

The theft has forced Nairobi county to leave sewage in the open or dispose of it in the Nairobi River.

Auditor General Edward Ouko said in his report the land (wayleave) was meant for laying fuel pipelines, water mains, sewer lines, power and communication lines from across the city to the recycling plants.

He said infrastructure has been complicated by broken equipment whose spare parts can’t be acquired locally. “As the facilities are abandoned, the environment will continue to be polluted with partially treated sewage,” he said.

The sewerage system was inherited from the colonial government and broke down in 2010, he said.

“The lack of management of wastewater leads to pollution of the already scarce water resources, further complicating the challenge of providing safe drinking water,” the auditor said.

Nairobi spent Sh2.9 billion to repair the sewerage system but the city is stretched by rapid population growth and urbanisation.

“The installed machines broke down in less than a year due to corrosion by high acidity of the effluent,” Ouko said.

He said the inlet works are being operated manually, allowing litter, including plastic bags, to pass and accumulate in the ponds.

The report says people are exposed to diseases since the system is outdated to address modern challenges and expensive to run due to bad technology. “It is, therefore, necessary to assess the effectiveness of these projects in ensuring adequate sewerage,” Ouko said.

“Sewerage services have been characterised by lack of a legal framework, disjointed and overlapping policies, old and inadequate infrastructure, lack of connection networks and the poor performance of utilities,” he said.

The county government and Athi Water do not have important documents on the sewerage system such as design reports and land title deeds.

The audit revealed that some of the sewerage facilities developed by Athi Water Service Board are based on inappropriate technology.

“Although the service provision agreement appears to fully delegate repairs and maintenance to the Nairobi City Water and Sewerage Company, it would ordinarily be expected that as owners of the assets, AWSB must take action,” he said.

The audit revealed inadequate maintenance of a sewerage treatment plant in Nairobi , which has broken, outdated parts. “As a result, much of the solid waste and plastics, which is intended to be trapped by the machines escape into the ponds, thereby reducing the plant’s treatment efficiency,” Ouko said.

The existing infrastructure has been inadequately maintained, further contributing to the inadequacy of the sewerage system.

“Achievement of Nairobi Rivers Basin Rehabilitation and Restoration Programme’s objective of enhancing environmental quality will remain elusive so long as the reticulation sewers are not developed,” Ouko said.