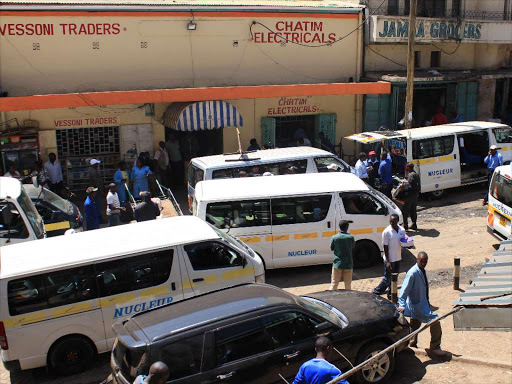 The parking slot on Mwimbi road in Nyamakima which is in contention between Nuclear investments and Triple S Services yesterday.Photo Chrispinus Wekesa

Business in parts of the city was disrupted yesterday as traders protested against the crackdown on counterfeit products.

Most shops were closed in Eastleigh, River Road and Nyamakima. Traders marched in the streets, carrying placards and chanting anti-KRA slogans.

They petitioned Nairobi Governor Mike Sonko and the tax agency. Riot police fired tear gas to block them from delivering a petition to Parliament.

They claimed officers of the Kenya Revenue Authority, the Anti-Counterfeit Agency and the Kenya Bureau of Standards are harassing them and destroying their goods.

The Nairobi Importers and Traders Association said some goods have been seized and others destroyed at the Port of Mombasa.

Chairman Ben Mutahi said KRA and anti-counterfeit officers have destroyed imported goods at the port in the nationwide crackdown.

“There has been harassment by government agencies purporting to inspect goods in possession of the traders,” Mutahi said.

Inspection should be done at entry points, he said, “So once the goods are in the traders’ possession, it gives them sole ownership.”

Mutahi said a few items of contraband goods in a container of consolidated goods should not warrant destruction of all goods in the container.

He said goods take a long time to be cleared and the crackdown is taking a toll.