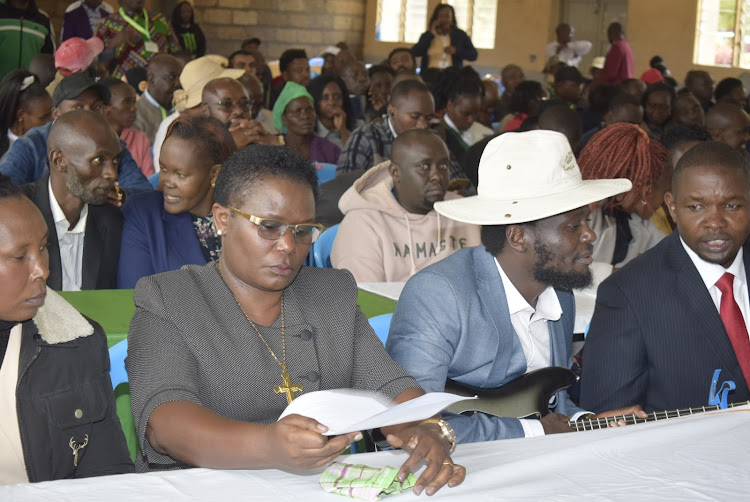 Meru Governor Kawira Mwangaza has decided to work with rivals who were trounced by Meru MCAs in the August polls.

Mwangaza has been going round wards in a move to neutralise MCAs opposing her administration.

On Monday, Mwangaza toured Kiangua in Igoji West and said she will work with former MCA aspirant Casty Micheni to bring development in the ward.

“I will not stop delivering development to the people of Igoji West simply because your MCA does not want to work with the governor," Mwangaza said.

She appointed Michenia as the county executive incharge of Youth, Sports, Gender and Social Development.

Meru MCAs have given up on their demand for ward fund after a meeting with the Controller of Budget Margaret Nyakang’o last week.

Nyakang'o said that ward fund is not anchored in the constitution.

The MCAs said they have left all the burden of development to Governor Mwangaza.

“All the differences we were having in Meru will come to an end because the governor said she will take care of everything, she will go to residents and identify all the projects they need,” Meru speaker Ayub Bundi said.

Bundi said that Meru residents should question the governor if they have any issues on development projects.

“If the roads are bad or they want classrooms and lights on the streets they should call the governor,” Bundi said.

Majority leader’s Evans Mawira said they will do their oversight role and leave the county boss to deliver development to residents.

Bundi has also ruled out a meeting to resolve differences between MCAs and the governor.

Mwangaza has dared MCAs to table an impeachment motion if they so wish. She is not afraid of any threats by the MCAs.

Say wrangles between the governor, MCAs has brought shame to the community.
News
3 months ago

Her style entails a public baraza where she asks residents for their opinion.
Counties
3 months ago

Governor Mwangaza calls off meeting with MCAs after MPs bolted out

The leadership tiff has threatened service delivery at the county.
News
3 months ago
Post a comment
WATCH: The latest videos from the Star
by DENNIS DIBONDO Correspondent, Eastern Region
Eastern
09 November 2022 - 11:33
Read The E-Paper